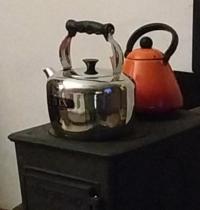 Lá Fhéile Pádraig! Here in Ireland we get a day off work to honour our Patron Saint Patrick. It's special this year because on Monday 17th Mar 1997 - 25 years ago - we threw a party for the builder and all his sub-contractors and their families. Cakes were made, drinks were taken and that night we slept in the house for the first time since we started camping on the property the previous Summer. It had been a year-long, legal and logistical journey since the auction but the house now had, for the first time: working electric sockets, hot&cold running water, functional gutters, a front door that closed tight and a roof without leaks. What any late 20thC home would expect as normal.

It took just 15 months before the acidic water ate through the hot-water cylinder to generate the first leak into the kitchen through the ceiling. It's been a succession of failures since then, and we've worn through 5 plumbers fixin' & replacin' stuff [starting with anything copper with the water so acid] which should never have been installed in the first place. It was therefore entirely appropriate timing that we should come home at tea-time yesterday [16th Mar] to hear the long familiar sound of drips in the hallway.

Drips are waaaay better than a gusher. But it would be nice to limit our encounters with the current plumber: the poor fellow was only here in January! Nevertheless, a plumber who responds is waaaay better than one who is busy or who screens calls and doesn't pick up. On the up-and-up, we had floor-boards up, mops rags and sponges sopping up and ladders up to the attic before St Plumb came to the rescue. He replaced another length of copper pipe with Qualpex plastic, caught me up on some local gossip and departed after somewhere between 1 and 2 billable hours.

Not for the first time, I have spent part of the night asking whether all these modern conveniences are really worth the candle. My pal Judith Hoad embraced a Bucket Economy which kept it simple by eschewing pipes, taps and sinks. Clean water is a precious commodity but is pissed away by almost all of us on the island. If we brought every gallon into the house by bucket from the well-head then we'd be a lot more careful about wasting it. We know another family in West Cork who lived in a home without flush toilets. Nobody wants to go outside in the middle of the night for a tinkle, so they kept a bucket on the upstairs landing as a convenience. All went well until the day Dad stumbled at the top of the stairs while on empty-the-bucket duty. >!kaSPLOOOSH!<

The picture at the head of then page requires an explanation? It shows my new Steelex 4-litre stove top kettle, literally eclipsing our old 2.1-liter enamel Le Creuset fashion accessory. I am introducing this by stealth, so that we will have hot water [bottles] when we get our next plumbing failure or electricity cut && the plumbing cavalry cannot gallop over the hill to the rescue immediately.