A while ago, I audio'd Salmon: A Fish, the Earth, and the History of Their Common Fate the latest [publ 2020] big book by Mark Kurlansky. His first best seller Cod: A Biography of the Fish That Changed the World [1997] has been in my sights for at least 20 years, but I never got round to it; perhaps because I was working, rather than reading about other people working. And that puts a finger on a significant difference between these two fish books: Cod the book is framed around the people - who saw fish as an exploitable resource; Salmon zooms out the lens to put the fish centre stage. This is partly because, in the 22 years separating the two publications, there was a sea-change in Joe Bloke's appreciation of the fragility and interdependence of the living world.

Another angle on the green deafness of Cod to modern tree-hugging ears is that the chapters are interleaved with recipes for eating cod - and the last chapter is essentially a bacalhau / morue international cook-book. Indeed, the book attracted attention for Foodies to win the 1999 James Beard Award to recognize exceptional talent and achievement in the culinary arts, hospitality, media, and broader food system. Note that the French word cabillaud is lifted from Dutch kabeljauw a rare case where the French have learned something about food and cooking from l'etranger. Purists and cooks should note that morue refers to poisson séché et salé whereas cabillaud is fresh. When I was walking through Portugal in 1989, apart from caldo verde twice a day, I'd alternate carne de porco assada with bacalhau in any one of the 365 ways in which salt-cod is served to a grateful Portuguese public.

When I was a kid in, say, 1960, frozen fish fingers were a thing: I could happily eat 8 or 12 at a sitting with or without spuds and peas. Back then, cod was so plentiful that fff was made from oblong fillets of cod covered in "bread" crumbs now, of course, the bread crumbs are still the chemical same; but the interior is made of whatever fish-offal is available and cheap; stabilised, bleached, emulsified, re-chunked and pressed into shape. Like a hot-dog's "chicken non-meat byproducts" don't even think of what's inside if you intend to eat the things; kids won't know any different.

Anyhoo, Kurlansky's thesis, pretty much incontrovertible 20+ years on, is that it took Europeans just 500 years to plunder seas to buggery: from the first voyage of Giovanni Caboto, sponsored by England's King Henry VII, to the publication of Cod, which coincided with its effective extinction as a commercial prospect. Abundance in 1497? "the sea there is full of fish that can be taken not only with nets but with fishing-baskets." It is a slight exaggeration that crewmen could walk from one boat to another stepping on the heads of mighty codfish. 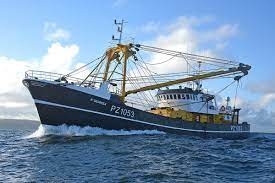 You really can't blame the poor bloody fishermen setting out through the chop in their beamer [R]. The best minds on the planet couldn't solve this example of the Tragedy of the Commons. In those 500 years of sea-pillage, nobody has been incentivised to hold back. It's all Macbeth with his damned be him that first cries, 'Hold, enough! And through at least the 20thC, sea-fishing was about the most dangerous occupation still available to the working bloke. And if incentives don't work, then neither do bureaucratic strictures. Quotas are an ecological and economic disaster as perfectly edible nutritious, not to say delicious, by-catch is dumped back dead into the sea because it doesn't meet this week's price or permit.

I guess I didn't learn a lot from Cod that I didn't know already. But hey, that could be because I did actually read it 20 years ago and internalized its message as my own. IF you've ever eaten some battered cod <mmmm, so good> piping hot from the chipper ANDIF y' never thought to ask where it came from THEN you really should read this book.

Posted by BobTheScientist at 07:03