I've said this before but I'll say it again; the mighty Georges Cuvier (1769-1832) summed up his expertise as "À la vue d'un os, d'un seul morceau d'os, je reconnais et reconstruis la partie de l'ensemble dont il provient". Essentially this translates as "your toe bone's connected to your foot bone, your foot bone's connected to . . . everything you are and do: what you eat, how you move to get what you eat, how old you are". This assertion of knowledge is partly true because of evolution and context. My thigh bone, gracile but strong, says that I am a runner [or could be if I'd only get off the sofa], the thigh bone of a hippopotamus says "plodder" and because of this "vegetarian". My thigh bone is far more similar to Usain Bolt's and Emmanuel Macron's than it is to one of our sheep grazing 50m away. Simply measuring and analysing teeth metrics we used this concept of homology [descent from a common ancestor] to assert something about Australopithecus spp. and the eruption of the genus Homo = humankind.

Archaeologists are capable of similar feats of deduction. From a series of blackened back-filled holes in the the ground, a pot-sherd, an axe-head and some pollen analysis, they can infer the life and times of a neolithic village and mourn its savage destruction. But about 6,000 years ago information became immeasurably richer because someone invented writing and history emerged from pre-history. After 4,000 BCE, therefore, we can begin to name [a few chosen] people and get another source of data about the life and times of people who are long dead. The written data is still super-patchy but nevertheless adds to our understanding on top of pottery fragments and a few crumbly skeletons to autopsy: like ourselves, the pharaohs were prone to TB, malaria, dental caries and thrush. 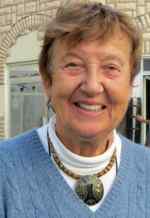 Denise Besserat was born in 1933 at Ay in NE France where they make the Bollinger >!cheers!< and made herself the GoTo person for understanding the birth and development of writing systems in the Near East. In 1954 she married Jurgen Schmandt, a philosopher and policist, and added his name to hers: Denise Schmandt-Besserat [L].  A couple of weeks ago here was a nice programme about her revelatory insight on BBC World Service which you can read or listen to [with annoying and unnecessary bingly-bongly background music].

We have known about cuneiform since archaeologists started unearthing barrow-loads of decorated clay tablets in Mesopotamia in 1929. These tablets, frozen in time, predate the writing systems of MesoAmerica, China and Egypt possibly because clay survives better than wood, paper or papyrus or more probably because this really was the first method of recording stuff in an abstract way. Writing things down precludes any possibility of the he said she said which is always a real possibility with a verbal agreement. One thing that supports the antecendence of cuneiform is the suggestion that early examples were impressions of tokens pressed into the wet clay.  Later, everyone who mattered agreed that a stroke with a stylus could double for a pressed token and was far quicker and neater to inscribe. That break-through also allowed abstraction for larger numbers. V rather than IIIII and X not IIIIIIIIII is on familiar almost modern territory.

For a generation after these cuneiform tablets [R section of one] started to be gathered, recorded and compared, nobody had a clue what they meant. Because archaeologists tend to be educated in the Arts Block, they were imagined to be poetry or messages between kings and commanders. DS-B had a hypothesis that they were an example of correspondence counting. This is used by cricket umpires who transfer a pebble from one pocket of their dazzling white trousers to the other whenever a ball is bowled: when six pebbles have been transferred the umpire calls 'over', everyone troops to the other end of the pitch and the six-ball cycle continues. What if the accountants in the marts of Uruk had little blobs of clay to represent a sheep, a firkin of ale, a bushel of barley, or tray of loaves? Scanning a table of pots containing the various tokens was a lot more convenient than going outside in the blistering sun to see how many sheep the merchant had to trade. One firkin/sheep/bushel = one token but it takes two to tango a transaction, so the receipt for sheep became a clay tablet impressed with the correct equivalent of tokens. They have found an inventory of about 300 different commodities represented by tokens.  Read this essay on the evolution of writing from U Texas. Actually, the tokens were initially stored in a ball of clay = bulla for convenience, which was ++ inconvenient because you couldn't see what was inside (they would have paid a lot of barley-cakes for a supply of ziploc plastic bags). So the accountants would write the contents of each bulla on the outside. It took a long time to appreciate that 10 chickens, 10 wine-skins and 10 loaves all had something in common - 10 - and mathematics was launched.

The idea of correspondence of two written records for a transaction/trade is captured by another lovely essay in BBC series 50 Things That Made the Modern Economy. This is about tally sticks: small (20cm long) billets of willow-wood upon which a series of notches were cut to represent the amount of the debt. The stick was then split lengthwise, half retained by the creditor and half given to the debtor. The notches and the grain of wood matched uniquely and so made an incontrovertible contract. One unintended consequence of these sticks was that they could be traded themselves for other products. The BBC story includes a neat summary of the 6 month long Irish bank strike of 1970. The economy managed quite well for half a year because people - publicans, shop-keepers, feed-merchants - would accept cheques from people whom they knew and use those checks to pay their suppliers and employees. A local peasant economy could make it work with that amount of trust. It brought into focus what money really is. Old banknotes had a flourishy statement "I promise to pay the bearer on demand . . ." signed by the president of the issuing bank. They have dispensed with that in multi-lingual Euroland leading to a further level of monetary abstraction. We've come along way since a handful of clay tokens were the sheep they represented.

Posted by BobTheScientist at 06:45