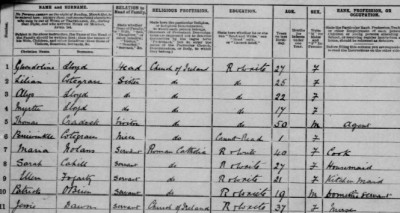 It's census time! In Ireland we have one every 5 years; the last being in 2016. The country took a rain-check on 2021, because Coronarama - but the collective "we" need data to plan for the future and take stock of the state of the nation. Or indeed the past: the clip above is a facsimile of the census report from The Home Place in King's County for 1901. All the boys were seemingly away in South Africa being surprised by Boers. There are even more servants in 1911 when The oldest brother had a) returned b) married the only daughter of an Australian sheep magnate.

On one 2022 issue What is your sex? 1 [_] Male 2 [_] Female The Man is tone-deaf. It's really not helpful adding in the notes the option to tick both boxes. I don't think it's just me who, since 2016, has been compelled to re-evaluate the nature and nuance of sexual identity. For about 17 out of every 1,000 births it is not abundantly clear which binary gender should be put down on the birth cert. Persisting in believing that M vs F is the only choice is regressive and not helpful for planning the future. And FFS, why not put women on top?: What is your sex? 1 [_] Female 2 [_] Male  even alternating the order each go round??

This time, The Man done better on religion; toppling Roman Catholic from the default pole position. In
2016 it was : Roman Catholic; Church of Ireland; Islam; Presbyterian; Orthodox; Other, write your RELIGION; No religion
In 2022:

It's a known thing that the first name on, say, an election ballot gets a boost. As does the last election poster visible as you enter the polling station. Religion is a private matter and we really need a secular state - starting with schools and hospitals.