Rodrigo de Borgia was born in Spain in 1431. He did well for himself. His uncle Alfonso aka Pope Callixtus III appointed young Roddy a cardinal at the age of 25. Pass it on . . . when Rod, in his turn was elevated to the throne of Saint Peter in 1491 as Pope Alexander IV, he was quick to appoint his illegitimate son Cesare Borgia a cardinal at the age of 18. Cesare was a ruthless careerist, rumoured to have killed his older brother in a love-triangle, and the subject of Machiavelli's The Prince the still relevant text-book of realpolitik. Whoa! Aren't ordained ministers of the church meant to be celibate? And fair-dealing? How much more the top-gun of the Vatican.

But, tush, enough of this. History is often a mystery and written to make a narrative out the mess that is the human condition. And Rodrigo is dead 500 years, that sort of thing doesn’t happen any more . . . does it?

The March meeting of the Wexford Science Café involved a celebration of Wexford scientists of yesteryear. Mary Mulvihill's book Ingenious Ireland has 32 chapters by county and is rather slim pickin's for Wexford. Someone joked that Mulvihill was running out of steam by the time she got to the Ws. But the combined minds of the attendees couldn't really present a lot of biographical fodder for the county. It has long been a source of bitterness that there was no University in the Sunny South East; with the under-thought that it's because there was never any oomph from the [non-existent?] Wexford STEM folk. Before the actual meeting - in the library - in person - the inner circle was tasked to do a show and tell on the Wex Sci Talent. 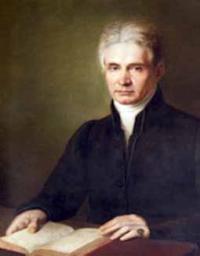 Someone volunteered to talk about mathematician Bartholomew Lloyd [L], born New Ross 1772, elevated to Provost of TCD in 1831 and died in harness 1837. I was delirah because there is a rumour that me and Bartholomew are related, but knew bugger all about the fellow. Unfortunately, when I offered: "Several years ago I was at a lunch at the Big House in King's County where my grandfather was born and was assured by David Norris that the New Ross Provost Lloyds were related to my K.Co. branch of the clan" Dr. Someone backed off from presenting his findings about early 19thC mathematical education in Ireland and insisted that it was my job. I shudda kept my flappy mug shut. But I would be a poor trained researcher if I couldn't rustle up enough for a five minute talk in about the same amount of Googling.

Bart is famous for bringing The Calculus into Irish mathematical education . . . only 150 years after Newton [1666] and Leibnitz [1672] invented and developed the concept. Which makes Trinity look like a bunch of hicks. But it should be noted that TCD added Calculus to the curriculum some decades before Oxford and Cambridge. Prior to becoming Provost, Bart had been Professor of Mathematics from 1813 and then held the Erasmus Smith Chair of Natural and Experimental Philosophy from 1822.  Thing is that fellows and professors at Trinity College were meant to be celibate - married to the job -  but Bart had married Eleanor McLaughlin in 1799 and they had produced 4 sons; starting with Humphey b. 1800 in Dublin. So that's one tick of walk like a Borgia.

One of the first actions of the new Provost was to ensure that his son Humphrey inherited his now vacant Smith Chair of Natural and Experimental Philosophy! In my book that's tick two of walk like a Borgia. The apple falleth not far from the tree and Humphrey Lloyd became Provost in his turn in 1867. Lloyd Jnr. made objectively the greater contribution to science: doing, like, actual experiments in optics, crystallography and magnetism. And founding TCD's School of Engineering 150 years before I got a free dinner out of the family connexion. But that's a story for another generation.