It's an anniversary of sorts this week because we moved into the house on the evening of 17th March 1997 - 25 years ago! We have a mighty poly-tunnel in the garden behind our house. We reckon it's been there for 15 years now; so we've had the tunnel for longer than we've not had it. I just can't imagine how we handled the the laundry before we had somewhere to hang everything without needing to keep a weather eye open for rain. And the tunnel has been useful for high-ventilation entertaining during Coronarama. The plastic is holding up but is getting opaque from sun-bleach even if I scrub the algae off - this significantly reduces the productivity of things photosynthetic. The failures have almost all been caused by rotting of the ordinary building timber to which we anchor the sheet of plastic. Replacing the punky rotten timbers as and when they fail has been a bodger's [meeeeee!] paradise and the overall look is patchwork.

It took a pounding during the Darwinday storm of February 2014. The Beloved and O'Manch, our then wwooffer, had to hold onto one edge of the plastic which had rrrripped off its foundation. It was like Cape Horn apparently but after 40 mins the wind abated and they were able to tie the thing down. Our neighbour, with a much smaller suburban polytunnel was looking out at the storm through the kitchen window, heard a bang and watched the whole thing thrash over the ditch into the neighbour's field. Mostly through the scots pines and hedges provide a rather sheltered micro-climate: in February, for example, Storms Dudley, Eunice and Franklin were weathered not a bother.

Last Saturday the county was subject to a yellow wind and rain warning, not worthy of becoming a named storm. As evening loomed The Beloved asked if it was okay to leave the door to the tunnel open over-night. I answered in the affirmative and then thought better of it and jinked up through the rain to close up. Imagine my concern to find that half of the door-frame at the far end of the tunnel together with its attached corner of plastic was thrashing about; detached from its bottom moorings. 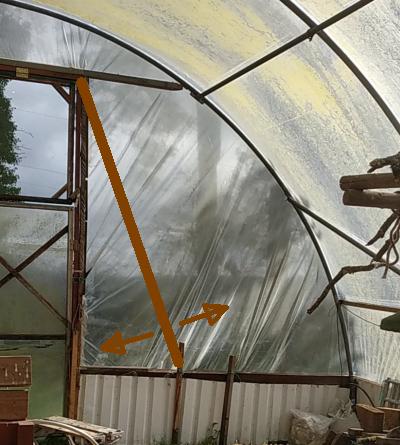 That couldn't be left open all night; not least because it could get thrashed to buggery before breakfast. I don't have an emergency first-aid kit for storm-wracked but I've been beach combing for years and had a handy selection of cordage to hand. It was really just a question of which rope was strong enough but thin enough to thread between the door and its frame. In about 40 minutes, before full nightfall I had secured the flapping spar and cinched it tight with a Spanish windlass, whc I've used before. 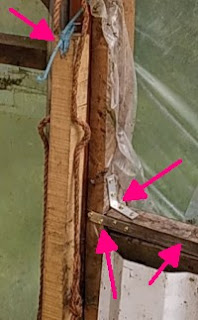 The next morning, the weather had blown through and after a restoring cup or three of tea, I set to making a more lasting repair. As with dentistry and painting, 80% of the work is prep. One of the problems with outdoor carpentry is that old steel screws get super rusty; especially in <surprize!> wet wood. And with a history of repairs back through the years, it's no unlike an archaeological dig. I needed a hack-saw to get rid of protruding screws as a prophylactic against tetanus. I also needed
I was pretty happy with the result. But really it is time to replace the plastic. I hear that the tech for connecting the plastic sheet to the metal hoops has evolved out the last decade and a half: no more 4x2s and battens would be good.