I think it's getting on for 15 years since we hedged and fenced our farmlet against the depredations of the neighbour's cattle. Before that the boundary was marked by a rough boulder-and-stone wall held together by prayer, mud and sceaghs Crataegus monogyna. The back-story is too long to reprise here and I'm no longer bitter-and-twisted about it. Whatevs, the boundary is about 300m long from edge of The Field Over The River to the lane which serves the house . . . and dozens of walkers at weekends. Actually we executed a number of fencing-dependent projects over the space of a couple of years at the end of the 00s. 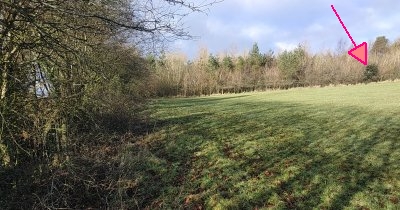 All the standards in our hedge got topped when we lent the field to some pals to graze horses who were quite capable of leaning over the wire fence and chomping the apical meristem, so now we have cherry coppice. A couple of weeks ago, when the long dry spell started, I thought it would be a good plan to  chop the blackthorn suckers which are march into the pasture from the roots of the hedgerow trees. Hack hack. Really a good idea to use eye-protection because these things whip around in their death-throes. I was only making desultory progress on the sucker-removal task because the goddam hedge has long since escaped the confines of the sheep-wire fence between hedge and paddock.

Accordingly, last Tuesday, another fine day, I took saw and loppers and started to cut off the overhanging branches brash off the small stuff and keep anything wider than two fingers for winter fuuuuuel. At it again on Wednesday . . . at it again on Thursday. It looks a bit ragged it has won about 2.5m of mowable, grazable sward for the edge of the field. That might be a couple more bales of haylage - which is money. It's also a neat stack of firewood which just needs to be cut to length and left to air out for a couple of years: 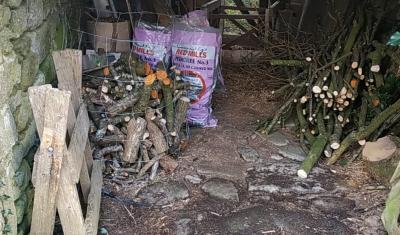 The picture at the top shows the shadow fall of the winter sun at 1045 GMT 27 Jan 22 from which, knowing the height of the sun above the horizon here and then [= about 15°] it would be possible [trigonometry!] to calculate the height of our hedge from the shadow across the grass. And hey, our forest over in the background is doing well. For scale, the holly Ilex aquifolium tree flagged with a pink arrow planted in 2008 at 40cm tall is now 3m tall.