[linguistic bias note: wood wide web is a clever, alliterative, memorable descriptor of the interconnexions down under the leaf litter but it gives primacy to the mighty redwood trees and makes fungi a passive bit-player part of the infrastructure. keep mighty myco medicine in mind as you walk through the woods]

Rupert Sheldrake [prevoblob and background]is an interesting bloke, he was born in 1942 and obtained a Bsc and PhD from Cambridge U and worked for years on the biochemistry of plant hormones . . . but he was also interested in the mystic traditions of India. He tried to paddle both canoes by leaving Cambridge and working at The International Crops Research Institute for the Semi-Arid Tropics (ICRISAT) near Hyderabad in India. But couldn't square that circle and has been increasingly critical of the complacency of science. He has the distinction of delivering a TED talk which was too challenging for that supposedly Out There organization and got deleted and then re-instated in a cupboard in the basement of TED Centraal - you can find it there but nobody will tell you where it is. 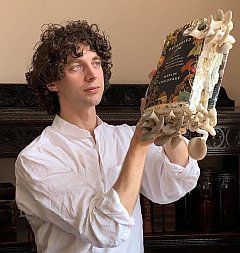 þe apple falleth not far from þe tree. His son Merlin Sheldrake [R offering his book up to The Great Spore of the Earth] is also a scientist but not a boring one. My current audiobook [5 minutes on edible truffles] is his Entangled Life: How Fungi Make Our Worlds, Change Our Minds & Shape Our Futures. This long subtitle is a bit like Mark Kurlansky's Salmon: A Fish, the Earth, and the History of Their Common Fate [prevoblob] but The fungus book is a bit less gloomy and apocalyptic. One way you can get your Out There ideas out there is to give up on the ould peer review and write a book. In a book, or a blog!, you can leaven the solid findings of scientific research with some untestable speculation . . . about how psychotropic mushrooms may have opened to the doors of perception in early hominids. Give up the ould tree branches wumman, you should try strutting your stuff on the ground . . . and the rest [axes, barley, clocks, dredls, epi-pens, flintlocks . . . and Voyager II] is history. I used to lecture about the contingent events that started humanity down the path from being just another ape and I'd never heard of that idea before. It doesn't seem wilder than some of the other speculation that has been thrown into that stir-about.

It is true that we have all been insufficiently aware of the impact fungi have had on the rest of life on earth. My life would be immeasurably poorer if I couldn't buy fresh baker's yeast Saccharomyces cerevisiae from our Polish deli on a regular basis. Fungi have been vital to the colonization of land by plants: they release phosphate and other minerals from bedrock and can buffer the soil for water, so that there is sufficient but not too much in the kind of habitats exploited by plants. There is a whole chapter on the investigation of nutrient transfer and sharing mediated by soil fungi in forests. Physiological ecologists of the profit-and-loss school like to count the molecules of carbon fixed from the air by photosynthesis and traded with fungi for phosphates and nitrates. This is why lurrying nitrates onto farmland to boost yield can be a blinking disaster. Some species of fungi are treasured by other members of the ecosystem because they can fix nitrogen. If this competitive advantage is set at nought by the Haber-Bosch process, then slimmer fitter microbes will elbow those beneficial fungi aside . . . making that field, on that farm dependent on artificial fertilizer forever. To the nearest whole percent, we know 0% about what makes a forest, or a hedgerow, or a pasture tick but in our hubris we're happy to barge in with a helpful intervention.

Just as a particular insight into how fungi can leverage a living, consider the case of zombie ants. These are typically some species of colonial Campernotus which get infected by Ophiocordyceps unilateralis. Through a combination neurotransmitters and hyphal invasion of the ant's brain and motor centres, the fungus alters the behaviour of its insect host. The ant is induced to climb up certain plants and attach itself to a major nutrient transport vein on one of the leaves. There the husk of a former ant hangs until the fungal fruiting body bursts out of its head to shed spores for the next fungal generation. There is nifty fossil evidence from 48 mya that zombie ants were being brain controlled by a fungus similar to today's O. unilateralis.
Next time you're tempted go chow down a handful of Psilocybin, ask yourself what's in it for the fungus to have you wandering about in sheep-pastures looking for god. Just who is in charge here?
Posted by BobTheScientist at 07:42