A life in an hour of the RNLI

Years ago The Observer's colour supplement had a last page of mini-biographies which they cleverly called A Life in the Day of . . . Monsieur Hulot [or whoever]. It wasn't until years later that I realised that I'd misread the title as the more normal A Day in the Life Of . . . 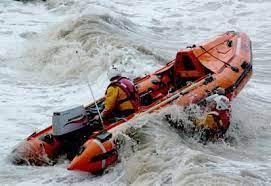 My latest audiobook from Borrowbox is Sea Rescue Stories by The RNLI. Borrowbox has a really terrible search function [or I am too thick to make it work properly], so I often download any book in which I can muster a flicker of interest. Which is good for me because I get to read things I would normally pass by if I had €20 I had to spend in bookshop on a rainy afternoon. RNLI gets my tribs and occasionally actual folding money because a) it does good work b) it provides a stage for heroic acts. Running a soup-kitchen or teaching maths to orphans are worthy enterprises but rather rarely requires bottle.

This book is a bit like David Carroll's Dauntless Courage celebrating the history of the RNLI lifeboats, their crews and the maritime heritage of the Dunmore East community [prev-review] insofar as it tells tales of crazy-bravery at sea. But here the stories are written in the first person by a few of the people who have won a medal from RNLI Head Office in Poole. Amazing life-saving exploits at sea are the bread and butter of RNLI and they can't be pinning medals and inviting volunteers up for a presentation in London every time someone is plucked from the clutches of Davy Jones in rough conditions. So I guess these stories are above-and-beyond. One of the stories is the source of the photo

Lifeboating is traditionally man's work; any associated ladies were left ashore to start preparing hot soup and sangers against the return of the crew. Not so much any more: there are plenty of women who pass the exams and afterwards go out on shouts with the lads. Two of the tales are by and about women, and HarperCollins has therefore elected to employ two readers; one to capture these female voices. Why? Why is that the salient feature? What about the fact that these stories come from all over these islands and presumably have interesting regional accents? Wouldn't that make for a more interesting audio book? For the male voice choir they have recruited Tim Bruce who makes it all sound like Blue Peter, the earnest BBC children's TV show of my youth. Gosh gee-willickers, I was exhausted when they pulled us back on board . . . but the thought of tea and sardine sandwiches soon revived me.

There's always room for another hero. If it doesn't happen to you [and statistically, it won't] this book will give you a whiff of what it's like to feel your heart in your mouth at the same time as trying to hold down your lunch.