Our economic and political system is all about acquiring stuff: without consumption of goods [and services] the economy wouldn't grow; and economic growth is the headline statistic summarizing how a society is doing. Crazy stuff happens: every household in our valley owns a cordless drill. The average lifetime usage of such a gadget is 20 minutes.  How much better the planet would be if those 50 households stored a log-splitter, a cordless, a cement-mixer, and a bit of scaffolding in a shed in our midst?

Cars are the same in this sense: unless you are a rep for big pharma, the district nurse or a courier; your vehicle spends 95% of its life stationary at home or in the works' car-park. I chose to have a 90 minute round trip commute making idle time [1.5 ÷ 24 hrs = 96%] but I did less driving on Sat+Sun. There's no way round that if your car guzzles gas [even as little gas as my Yaris]. But if we are going to be moved - kicking and screaming - into a world of electric vehicles then the idle car can be come an asset . . . but only if we can think out side the personal toy mentality of my car.

Utrecht is a city for which I have a lot of affection: we lived there for a while in the 1970s when I was working in Blijdorp Zoo in Rotterdam. The centre was small but perfectly formed round a big church and a market surrounded by a canal where the old cellars and warehouses had been converted to cafés and flower-shops. Utrecht also has a University and has become a bit of a tech and business hub because it's more gezellig and family-friendly than Amsterdam or Rotterdam. It is throwing shapes to be the City of the Future. 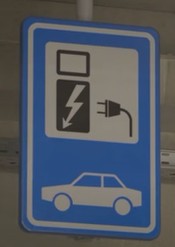 My pals at Metafilter flagged a real eye-opening short aspirational film about integrating domestic, commercial and transport electrical energy in Utrecht so that they draw very little from the NL national grid and each sector supports the others to make best use out of car batteries. Because Lithium car batteries have massive capacity for storing electrical energy. Efficient energy storage is vital for any economic planning because renewable energy and human energy consumption both fluctuate wildly through the day, through the week and through the year.
So ASR Nederland, an insurance company, has roofed the car-park in solar panels and provided 250 bi-directional v2g vehicle-to-grid car-charging points. The drones come to work and plug in their cars. By the time they have walked up to their cubicles, the car batteries have fired up the lights, the computers . . . and the kettle - because no work gets done without koffie. In the afternoon, the sun comes out and the solar panels top up the cars before they are needed to return to workers home.  There are 2,000 solar panels with a capacity for generating 850,000 kWh of electricity. An average home in Ireland - or Nederland - uses about 4,000 kWh of electricity each year. So roughly the 250 cars can bring home the electrical bacon and run the lights and kettles at 225 homes as well as keep the workplace warm, dry and lit. At weekends, the solar panels can feed back into the National Grid.
Currently there are 140,000 personal vehicles registered in Utrecht. Back of an envelope calculations suggest that, when the count electrical vehicles and charge points reaches 10,000, then the whole city will be a closed loop for its electrical needs. I think that's dead cool. Naturally Metafilter adds some value and numbers to the discussion. TIL that Tesla Power Wall is A Thing.
Posted by BobTheScientist at 07:32