The kindness to others

I'm not a poet. In my teens, my hair was long, I wrote poetry, but I'm not a poet. You need to pay attention to be a poet, and have exacting standards, and bin full of scrumpled drafts. Kate Clanchy is a poet although I've only read her prose; and of that only one book Some Kids I Taught and What They Taught Me and that only through my Borrowbox ears. But listening to the cadence and being sprung from the ordinary by her turn of phrase makes this memoir sing. As you might guess from the title, this story is an account of 30 years at the coal-face teaching English and Poetry and Passion and Empathy in Comprehensive Secondary Schools: in Scotland at first, then among the exotics East of London. Clanchy's anonymized school is filled with the dispossessed - generationally unemployed, refugees, New English, poor. Because parents with any mojo or moolah will place their kids where the exam results are better: in the, largely mistaken, belief that schools generate college-bound teens rather than the resources and expectations of the parents. 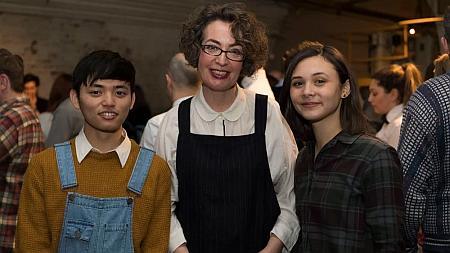 Teaching is a vocation, at least for some teachers: Clanchy's mission is to hear the voice of her teenagers [flanking above] and this, in itself, is extraordinary; because ordinarily poor teens are ignored or treated like a noisy noisome pest. She acknowledges that, while some have a true poet's ear for rhythm and sound, they almost all lack the ability to analyse poetry: their own rhythms & metaphors or those of others, in a way that will allow them to pass an exam. And their vocabulary is stunted too: because there are no books at home or Mum barely speaks English. Thing is that these children have lived lives less ordinary and can, if allowed and encouraged, create poems of stonkin' power and affect to make sense of the horrors they have endured.

Clanchy, with her observant eye, has a habit of using an element of her pupils looks or presentation to nail their character. " . . . his anger was as big as the weather" . . . “so small and square and Afghan with his big nose and premature moustache”. This language has triggered a twitterstorm of indignation about Clanchy's ableism and racism predictably captured by the Guardian. And Clanchy, contrite, has agreed to re-write the offending passages for the next edition of the book. So that's a win but it's also a shallow judgement because I find that Clanchy genuinely cherishes the diversity manifest in each writing class. Racist folk see differences as a caricature of their own preconceptions. Clancy sees it as something wonderful: such grace and freshness; such grit, and wit; such mutual support and pride and rivalry. Sure we could be, like the Finns, institutionally colour-blind but that makes for a monochrome duller view of the world. Acknowledging, celebrating, The Other allows us to recognise that differently-abled means that kids with ASD can see things and do things differently not worse than you and me. By extension the views and experiences of the dispossessed

Another mis-step which didn't get as much traction is Clanchy's claim to have been Othered at the start of her teaching career in Scotland. She qualified to teach with a PGCE after gaining a BA from Oxford. Having been born and raised in Scotland that's where she wanted to teach, but all she could raise were temporary substitute-teacher jobs. Permanent posts seemed to be reserved for folks whose Scots-cred was unimpeachable: her English accent and Irish surname damned her to the second-tier along with Canadians, Kiwis and USians whom she met in the substitute teachers annex of the staff-room. So she headed South and worked with refugees, immigrants and poor whites in Greater London. On some level that is equating her status as a refugee from her native land with that of her Syrian and Somali pupils. Of course, pitching up to London on the train from Edinburgh is not the same as arriving in Tilbury packed in a clandestine shipping container, but the loss and sense of betrayal have some sort of cosmic equivalence.

This is a great book: inspiring, compassionate and a devastating indictment of "school" under 30 years of Tory misrule. Read it now before it is re-written in Newspeak greyness. As a taster why not read some of the poetry which she has midwifed from troubled teens over the last 30 years at the coal-face.