Psychologist William James (*) characterised the world of a newborn child as a “blooming, buzzing confusion,”; we spend the rest of our lives trying to make sense of it all. With the development of language we can explicitly put labels on things out there [Mom; the other feller; the pink dinner, the beige dinner; Mitsy, the cat next door, Cats] but even illiterate animals, like Mitsy, can put things into bins and react appropriately - food = good; sea-water = bad; dogs = proceed with caution. Most folks go through their entire lives (like M. Jourdain in Molière's le bourgeois gentilhomme who is surprised and delighted to have been speaking prose for the last 40 years) doing this with realising they have the skill. Many of us, for example, have been forced into a radical re-think of pronouns in recent years because {M/F, his/hers, ♀♂} is clearly a bit of a BLunT insTrumenT.

I'm a biologist, not a very good one, out in the field, but I think a good bit about taxonomy - the science of classification. I've written about a profound discussion we had sous le pont d'Avignon about how to lump living creatures into appropriate bins. Some schemes work better than others - because they make better sense - they generate more internal consistency; they make the world a bit less random. "Have wings" is kinda useless because it includes wasps, fruit-bats, mansions, buzzards, 747s, football teams, dragons and angels. It's not always obvious either: whales really are streamlined hippos. 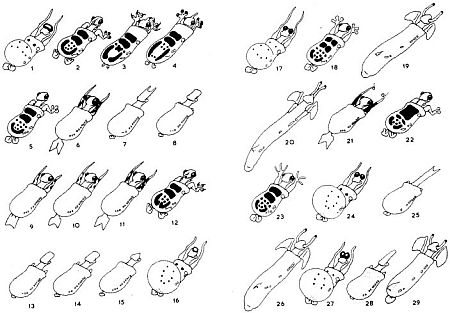 I think this is an important concept to get over and when I was teaching "Evolution" and "Genetics" back in the 80s, I used Caminalcules [selection above: from] as a defined dataset to help students think in classificatory terms. These delightful creatures were invented by Joseph Camin the the 1960s. He started by drawing a cartoon animalcule and imagining how it might evolve. Changes were made to a copy of the original drawing and so, iteratively, through several subsequent generations down several different paths.

At some point Camin aka God called a halt to evolution and assembled 29 extant / living species on a single sheet of paper for a student exercise in practical thunk. The task was to use scissors to cut out each of the 29 Caminalcules and put them into bins of similarity. Like mammalian classification, the task is probably recursive: dogs are more like wolves than either is to foxes; leopards is pretty close to those lads; but cows and bats . . . and wombats are further and further away from Fido. I started doing the same in the 1980s: we'd work in pairs initially; pause, compare notes, discuss, adjust and finish up with a solution that pleased everyone in the room. Usually next year's class was in close agreement with their prev peers.

An additional task is trying to infer the ancestors of the 29 leaves at the end of the branches but that was more than my students needed. Having The Answer in the fossil drawings which Camin had made seemed a bit luxurious to me. In the 1990s, I shifted countries and emphasis and started working on DNA and protein sequences and using them to infer evolutionary relationships; and the pattern and process of evolution along the way. In the 90s there was no fossil DNA (and no fossil-fossil missing link whales, for that matter) so a great deal of the effort was inferring ancestral states in the sequence tree.  This century, Dan Bradley and Lara Cassidy at TCD [yes yes and lots of others across the world] have opened up another dusty can of worms by getting to sequence ancient DNA. Now you can ask 23andMe just how Neanderthal your brow-ridge is.

(*) It might be worth noting that William's younger brother was writer Henry "The Turn of the Screw" James.