There was a time in my life when I had to spend a regular night in Dublin and was too thrifty to pay for a hotel. It was almost always because that night was bracketted by two long days pushing the frontiers of science at work. In those noughty days, you could get a clean bed and toast for breakfast for about €12 and I made it a bit of a project to spend my money widely to see which hostel offered the best value.

I now find that I've gotten to know, and paid, quite a number of tree-surgeons and found that some are more fun than others; some are cheaper in the long run; and one was a nightmare - a bully who did none of the physical work but scraped half the actual money into his pocket. That bloke came with three other people - the tree-monkey upstairs and two fit young chaps to do all the pully-hauly ground work. All I had to do was a) pay b) stay out of the way. That was efficient but also wasteful as a goodly amount of [what I would call] firewood was pushed through the chipper without heating anyone's living room.

Ideally, 1 would like to have a couple of days to process the branches rained down from above and only chip the twigs and ivy that were too small to pass as kindling. But in practice it never works out like that because the groundlings have to clear the brash away from the base of the tree lest it builds into a nightmare log-jam higher than a tall man can reach. It's heavy work and has to be done quickly . . . and I think I may be getting to old for that nonsense. 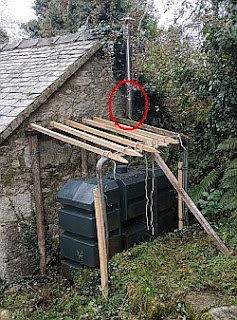 This Summer, ash die-back Hymenoscyphus fraxineus really began to make its presence felt in at least some of the ash trees Fraxinus excelsior on our farrrm. A few weeks ago, a new kid on the tree-surgeon block sailed over our horizon for having sorted out a dangerous beech tree Fagus sylvatica belonging to some pals from the next county. We gave him a call; he came to scope the problem the next day; gave us a reasonable quote and a date three Saturdays thence. The immediate problem was the two ash trees which loom up behind the house, with heavy branches hanging over our little slated toolshed and the heating-oil tank. Eventually these branches, weakened by die-back, will crash down; probably at night in a desperate storm. Before that the tree will be unsafe to climb and so beyond controlled demolition. So we're moving early while the problem is still soluble with money. Three weeks gave me enough time to rig a temporary shelter over the oil tank [R] - if that gets cracked or upset we may drill a new well. An unintended consequence was it provided another reflective surface to annoy our psychotic window-bashing blackbird. 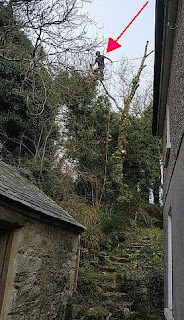 I was far too busy hauling branches about to take time to photo-document the process, but I did take a snap of Seán high up in a denuded tree [L to compare with the Before picture from July]. Yes, he is walking out along a branch 12m up, suspended by a safety rope attached to a residually higher part of the tree. The dense green to the left of this picture all came down after lunch. None of the falling timber, bar leaves and twigs, fell on the oil-tank shelter or the slated roof. But I'm glad I made the lean-to: an in$uranc€ pay-out is never as much as the disruption and inconvenience of a significant accident occurring. A huge pile of brash - maybe 20 cu.m. in size - was passed through the mulcher: about 70% fired directly into two 1 tonne builders' bags. I spent an hour the following week raking up the rest of the mulch spatter and bagging that too. A garden can never have enough wood-chip. Another unintended consequence is that we can now see the mountain from the yard in front of the house; so that's a win.

I tell ya, sad as I am to have one less tree to hug, felling out those too-close-for-comfort ash has been a load off my mind.