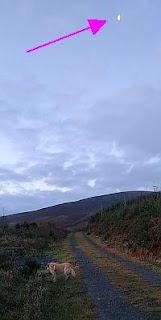 One of our neighbours escaped the Irish Winter to make a three week sojourn in Tenerife with their family. Fairy nuff, I said, not without a twinge of envy. Their aged dog was not invited and a series of dog-sitters were engaged . . . who turned out to be spectacularly unreliable. I fielded the first call for doggie backup less than 48 hours after they left and again on Christmas Eve: please feed the old boy and make sure he can get himself into his bed afterwards. The Boy is over for the hols and he came with me out into the gloaming for the walk, like. It was handy enough to have someone else to hold a torch to make sure I opened the right tin of dogchow.  It was a little drizzly.

That night it started to rain stair-rods over the 'sunny' south east. Not monsoon quantities but a weather front got itself stuck over our corner of the country and delivered ~50mm of rain between midnight and Christmas noon. When I went to let the dog out, I there were puddles right across the road but four hours later at noon, the drain that runs in parallel to our drain was brimful and roaring. The two outdoor effectives - The Boy and Dau.II  - came with me up the hill to try diverting some of the roaring water off the lane. On our way back, I saw that the drain had breached below our house and was ripping up the road surface between us and civilisation. The cars were ASAP squeezed past the damaged roadbed while Dau.II & I worked to clear the obstructed drain.

Even as we got the drain to drain, the rain started to ease off and by Christmas teatime we were in control without anyone having sustained injury. There is only so much that it is sensible to do with a shovel and wheelbarrow, when tractors with front-loaders, backhoes, and various grades of road-fill are available for hire or purchase. The bridge at Kilcarbry Co WX (about 15km from us) washed out. But for us the Christmas Day Flood of 2021 achieved only Third 🏵️ in records of damage sustained by the lane to our home. First, Second. .The lane is on a 10% grade and downhill water has a tremendous energy for destruction. St Stephen's Day dawned clear and dry and sunny and I was able to recover my spirits by having one Old Dog take another up through the forest to get a little closer to the moon [pic R]. Life is good.