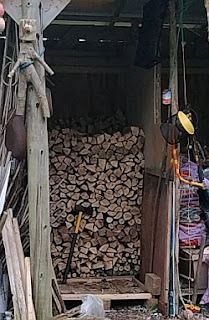 We felled out a couple of slow-dying ash Fraxinus excelsior trees recently. I've been stacking, sawing, splitting and [wood]shedding through the mountain of fallen timber that resulted.  It's ash, so IF I expose the maximum amount of interior surface area, by splitting anything thicker than my arm, and stack it in a nice draft, covered against the rain, THEN it will be ready to burn next winter. As I said to the New Faller Seán, ash-dieback is going to be his bread-and-butter [and our wi♬ter fuuuuuel] for the next ten years. I like doing the post-op ground-work: there is no tearing hurry, like there is on Felling Day, and log splitting is a contemplative puzzle with elements of zen. I go through the smaller logs with by bushman bow-saw because it's quiet and the cut is razor thin. I've so far filled one bay of the Hilbss Woodshed with ~2 steres of split logs [R with splitting maul for scale, and face shield for safety]. That's a little over half a cord for any Nordamericano readers.

Knotless, branchless ash logs split very nicely with a satisfying >!tonk!<  but they have to be cut to a length [400mm max] which will fit in my woodstove and for that, as for the gnarly bits, a chain-saw is your only man, despite losing 1 cm of each cut to sawdust. Quite apart from the hassle of getting into my kevlar PPE before picking up the orange workhorse. Anyway, on Sunday arvo, I cleaned my chain-saw and touched up the teeth with a file, so I'd be ready to do some work the following [I R Retire, so every day is Saturday except the Sabbath] day. Imagine my chagrin when I test-started the saw and the pull-string failed to engage.  Because, as it transpired, one of the two key watch-springs in the mechanism had broken.

Luckily, making idle conversation over tea and chocolate biscuits with Seán, I had asked who was his Go To for chain-saw mechanics. Tree-surgeons don't expect to do more than routine in the woods maintenance; no more than you know how to replace a timing belt on your car. And the answer for North Central Wexford is Diarmuid Sweeney Grass Machinery at The Harrow. Accordingly I called him up early on Monday morning and delivered the chain-saw before lunch. It was all very agreeable not least because Sweeney's watchword is "No Problem" uttered in a calmly competent manner. It was as well that I tried finding him on Monday because the following day Storm Barra carried away a crucial direction sign.

"No Problem" Sweeney called me first thing 48 hours later to say that my saw was working and ready to collect. That is the fastest turnaround I've ever gotten from the 1, 2, 3, 4 chainsaw-guys I've dealt with over the last 20 years. And the price was less than we pay the plumber. We had company for lunch, which was delightful, but there was still an hour of daylight left after I nipped down to the Harrow and back to collect the saw. Brrrzzzzt brrrrrrzzzzt cut cut.