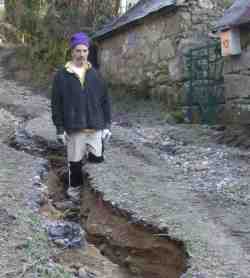 Aside. I didn't think, yesterday, to get documentary evidence of what a-lane-swept-to-buggery looks like. The picture above from Feb 2010 shows that the trough was a) knee-deep b) as wide and c) wiggly. There was no way my modest car could negotiate the obstacle.

Enough history back to the Present Moment. Along with the rest of the country we're on lock-down for Emmacolypse with a third night of sub-zero temperature even before Storm Emma makes landfall. I was out yesterday evening cutting down some generously-leaved ivy Hedera helix branches for the sheep [N = 29] to get some extra calories into the old dears - they don't all relish haylage. We are also giving them a daily bagful of #3 sheep muesli against the cold. That tastes quite tart from the citric acid and is quite thirsty-making, so it's only fair to ensure that they have a supply of water. The Interweb reports that sheep will happily eat snow to satisfy their lust for liquid and they are a lot less demanding in that dimension than, say, cattle. You can do a certain amount with a hammer, knocking holes in the ice but it soon crusts over again. All the outside taps are now solid, so we schlepped a few buckets of warm water from the kitchen. It's barely more efficient to carry a kettle of boiling water because even 3 lt at 95oC won't make much lasting difference to 20 lt at -5oC.

Then The Beloved was surfing a sheep-site in Canada where they suggested adding molasses to the drinking vessels - perhaps the technical term is a ewer, <har har har>. That seemed like a good idea: we don't have any molasses, but I have a good supply of golden syrup to make Apocaflapjackse, and we have 4kg of sucrose on the kitchen table for jam making. Further Googling said that we'd be at nothin' there because a mole of sucrose is absurdly heavy [342g]  - about 6x more is required for the same lowering of the freezing point as, say, NaCl [58.5g]. A 'mole' aka gram molecular weight is a way of emphasising that chemistry, including freezing-point chemistry is about the number of atoms / molecules present rather than their collective mass.
How much granulated sugar would we need to lower the freezing point of 20 lt of water, then?
You need to know that Kf, the freezing point constant for water is 1.86, it's generally lower than for other solvents. Here's the formula

ΔTf = Kfm
A trivial rearrangement says that 1 mole of dissolved material will lower the freezing point by 1.86oC. That's 342g for every litre=kg of water or about 7 bags of sucrose to keep a 20lt bucket liquid at -2oC. That's a lot of sugar! about €10 worth. I think I'll stick with the hammer solution. Glucose, a monosaccharide would do twice as much work lowering the freezing point as sucrose which requires twice the weight to make a mole.

With road salt, you have to add more salt to keep things liquid at progressively lower ambient temperatures until at about -18oC you cannot dissolve any more salt in the water. CaCl2, works 50% better than NaCl because it dissolves into three entities Ca + Cl + Cl rather than 2, but it's more expensive.

Emmacolypse? I just made that up and it's a neologism: Google reports:
Your search - Emmacolypse - did not [yet!!] match any documents
Posted by BobTheScientist at 07:31