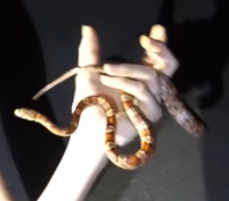 Hot Press; Gardaí are asking the owner of a bright yellow corn snake Pantherophis guttatus [specien R] to claim the reptile from the National Exotic Animal Sanctuary in Co Meath. Forget your Japanese knot-weed Fallopia japonica and Zebra mussels Dreissena polymorpha we really don't want snakes getting established on the island of Ireland 1600 years after St Patrick drove them out with his crozier and vibrating reptile excluder [not!]. Jaysus, absence of roaming snakes is the last thing that separates our way of life from the Brits - after all the plain people of Ireland have embraced royal weddings, Pointless and Manchester United with all the fervour of Tory heartlanders. In their right place snakes are cool - just makin' a living like the rest of us except that corn snakes prefer mice and I prefer mouse-sized sausinges for breakfast. I gotta own that fresh mouse is objectively better food than [don't look at the ToC] sausage. Like herping in the Everglades [R] looks like a lot of fun.

Turns out I have a couple of snake stories, both from my year in Nederland [1979]. Anton van Woerkom is now a big cheese in Dutch herpetology. I knew him slightly - I think he was working as a technician in Utrecht U when I was mentored / adopted by Janni van Brink. One afternoon, Anton invited us [The Blob, The Beloved and The Boy aged ~4] to visit his home = herpetarium. I guess we had a cup of koffie and maybe a stroopwafel. It was 'different' to have the walls of the living room lined with terrariums containing a variety of sleepy reptiles. Anton lifted a big boa out of its home to let us have a closer look: it was really for The Boy, I guess. But Anton's labrador got a little too close too quick and was, for his trouble, slashed across the nose by the snake, drawing blood. Respeck! You've got to recognise that different folks have a different take on social distance; and we are much more sensitive to this post-Covid.

Very shortly after this, Dr van Brink wrangled me a job in Afdeling Vissen at Diergaarde Blijdorp in Rotterdam and I lost touch with Anton. It's mildly amazing that I was able to dredge up his name after 40 years. It was impossible to shake loose from snakes, however, because Fish, Reptiles, Birds and their respective keepers were all housed in the Rivièrahal.  As with banks, the working day for us keepers was longer than the public facing day. My first task every morning was to take a bucket of dilute vinegar and a chamois leather round the hall erasing the nose smudges and finger-prints of yesterday's visitors.

After Jan Publiek went home in the evening, we got to feed those animals whose table manners were really NSFW or at least potentially distressing for children and sensitive adults. We had one tank full of baby garfish Belone belone which wouldn't eat hamburger like their neighbours but subsisted on live baby mice. Some of the snakes also insisted on fresh food which they had to kill themselves. Accordingly, one or two live white mice were dropped into the relevant terrarium after hours. One morning, as I whistled my way round the hall with my bucket, I noticed one of these mice still occupying a corner diametrically opposite to the resident snake. The assistant deputy reptile keeper was tasked to whip the rodent out and put him back in the larder his cage.

My repertoire has a 3rd snake tale, about a python in an Irish Bar in Madrid, but I've told that before.