Only here for the merch 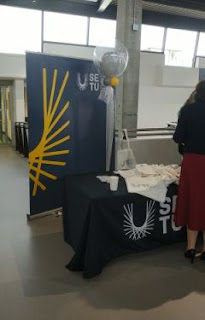 The "brand" new South East Technical University was signed into existence on Sunday 1st May - the minister putting in a bit of overtime. Last week an e-invitation went out for a series of l[a]unches at the three campuses which constitute the new Tech University  Expect great hospitality, music and SETU goodies  which I have cleverly rendered in appropriate branding colours. There has been much laconic comment among my old colleagues about the leaky bucket logo [shown L at knee-level, my old roomie Y included for scale] in which U for University is constructed with a series of tangents to the curve - all sort of missing the central point of a University.

I am a sucker for freebies = I was a graduate student once. There is no better metaphor for a shonky organisation than distributing hundreds of branded pens . . . which don't work. But I couldn't justify driving a round-trip of 80 kilocarbons to pick up more crappy pens. I therefore arranged a date with A3 the bright young fella who didn't get my job - wasn't even short-listed - when I retired from one of the SETU parents in October 2o2o. We had a couple of zoom calls at that time to give him the inside dope because he was part of the Irish Binfo community and post-doc in the binf.lab of A2 an old pal and one time employee. A3 is like my younger self, except smarter and with significantly more 'finish' = able to get data into shape, written up and published.

We went for a long walk up the towpath of the Barrow Navigation, incidentally checking out the industrial blight at the Navigation's interface with the old demolished sugar factory. In contrast to Hamilton in 1843, neither of us had chalk in our pockets, so we couldn't write down any deep thoughts on the abutments of the several bridges under which we passed. I learned an remarkable amount about the Tara Oceans Project and the distribution of deep-sea marine amphipods. Tara has similar aspirations to Craig Venter's Sorcerer Project which documented a marine sampling of microbial DNA - so much local diversity despite the stirring of oceanic currents. YIL that dogfish Squalus acanthias, several of which I dissected at school because it was so abundant in the by-catch of the 1960s, is on a branch of the tree of sharks which a) separated from other elasmobranchs 200 mya b) hasn't a sequenced genome to show for itself. The effort to obtain DNA sequence data is patchy and particular: shouty important people can get the money to analyse their pets [Shadow, we're looking at you]. Why might this holiday in the data-landscape matter? Because these fish have an immune system which works and is not too dissimilar to ours, and comparative immunology might give us insight into how immune systems work: are there essential elements in a sea of variation?

We also had a wide ranging discussion about how science works, and how we as individuals in that peculiar world found our niche and made contributions towards understanding the ticking of the natural world. Sometimes it is more productive to keep the show on the road: teaching, maintaining, mentoring rather than being obnoxiously ambitious, secretive and careless of the feelings of others. I had a really great time teaching in The Institute for the last 8 years of my working life - every Monday morning I put on my happy face for Bio 101 labs - but I'm really glad I didn't start into that mill when I was A3's age. A combination of [lucky but make you own luck] circumstances let me be a fly on the wall when extraordinary science was being done and that experience made me a better teacher and my classes a lot more interesting - for everyone. 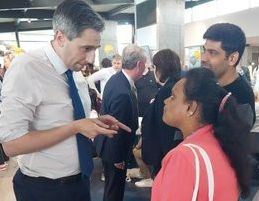 But all good walks must come to an end . . . and I had merch to collect at the SETU launch. As well as a couple of bites of chicken nugget and a fancy petit four, I secured a [branded] pen, a lanyard, a tee-shirt, a water-bottle, all in a cotton tote bag so thin you could read a newspaper right through it. I hope that SETU lasts longer than this token bag, because re-branding is a hugely expensive drain on the planet. There is a dumpster out back filled with The Institute letterhead. It was nice to catch up with my old, and getting older, colleagues but nobody was wearing a mask [R the minister sharing spittle for Twitter with A4 and A5 student palominos from The Institute], so I'll have to hope that, as well as a tee-shirt, I haven't copped a 'Rona.