Years ago, in my population genetics days, we discovered a lot of Manx cats in  parts of Maine and New Brunswick. By "a lot", I mean countable examples because, on the streets of New England and the Canadian Maritimes, Manx cats are really rare; so even a handful needs some kind of explanation. One of the hypotheses to be tested was that there had been particular and peculiar traffic between these maritime towns and the Isle of Man - where Manx cats are indeed reasonable common. In those pre-WWW days you had to scrabble about for data to analyse and I spent some time in the library looking at the Shipping News columns of local-to-Maine 19thC newspapers. That came up empty. So I turned to telephone directories to see whether there were more-than-expected typically Manx surnames [Clague, Corlett, Kelly, Moore, Quayle, Quirk] in Augusta, Me and St Stephen, N.B. That yielded enough data to analyse . . . and show that settlement from the IoM was not a good explanation for the excess of tailless cats. 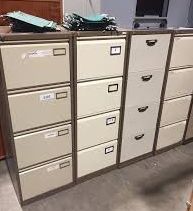 Dau.I the Librarian was visiting "home" for two weeks in April: a) Easter & chocolates with her niblings b) "study time" from work to knock off some end-of-year assignments to mark the half-way point of her two-year MLIS degree [Masters in Library & Information Science. When she returned to work  the next week she had to go downstairs to the dungeons archives and: cull some of the staff records, consolidate others, integrate two sources of data and file the whole caboodle alphabetically by surname. Most of the files now exist in 7# stuffed 4-drawer filing cabinets in a basement. Future-proofing and elbow room has allowed her to order 2 more cabinets for a total of 36 drawers.

Channelling Pat the Salt in his aphorism never move anything twice, it seemed to us sensible to add an empty cabinet at each end of the existing row of seven and start distributing the A's into one set of empty drawers until bored and then start similarly disbursing the X Y Zs to the the other empty cabinet. That way she'll be able to leave the Mc's and O's in the centre of the Irish alphabetical world. So there is an implicit hypothesis: that these patronymic surnames are indeed more common in Ireland.

First thing to note is that frequency of Initial letters [M C B D O K H F R W S L G P T N A E J Q I V Y U X Z] is very different from general letter freq for English etaoinshrdlu. Murphy and Mc/MacNames do indeed fill the middle ground of Irish name space, O' not so much: shoved down the list by Connollys Byrnes Dohertys. You might think, and we did consider, that it would be better to audit the actual data in the existing file-cabinets. But that is not really future proofing the system: At the present moment, for example, there is nobody in the City Library Service whose name begins with A. But there may be in the future, especially if the Library succeeds in diversifying its employee base - think Akinrunde, Battacharaya . . . Yong, Zieliński