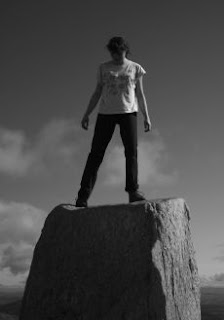 Time on Rock: A Climber's Route into the Mountains by Anna Fleming [R on another pinnacle; from her blog The Granite Sea] was only published this month and a) I downloaded it on spec through Borrowbox b) abseiled down through it like a freshet burn. It is a worthy successor to Nan Shepherd's The Living Mountain which I read through Christmas 2020. And indeed, Anna cites Nan for helping to give her a more contemplative and less conquistador view of Britain's high places. It is okay, it is better, just to be in the hills and forget all that macho goal-driven Munro-bagging triumphalism. Nan Shepherd was born about 100 years before Anna Fleming; so the mantel has been passed by proxy and importantly by writing. Fleming is an Eng.Lit. major with a PhD [Thesis: ‘Wordsworth, Creativity and Cumbrian Communities’(2017)], so has a good idea about how to construct a lucid and evocative sentence.

The case is made that although climbing is still largely a man's world, you would be wrong to think that women are not as good . . . because testosterone drives muscle mass; because r e a c h matters; because hormones. This is mostly bollix: women may be less strong but they have less weight to propel upwards. And hormones may give a greater range of affect but that can mean that when women are at the peak it makes men look and feel pedestrian. The Pill, by blandifying the cycle, may put a snaffle on The Best that can be achieved on the rock-face. Deliberate practice on the rock hones the proprioceptive senses: like dancers, climbers [have to] know where each of their extremities are without having to think about it. The thinking [energy sapping in its own way] has to concentrate on the tactics: each of several contingent moves to get to That solid hold. Hearing too: avoid holds which sound hollow when you tonk them with the heel of your hand.

Rock climbing can be a solo sport - Reinhold Messner famously soloed Everest in 1980 - but the smart climbers go with a partner. Someone with whom you develop an empathy and understanding based on shared epic tales and maybe complementary skills. Fleming has climbed with a lot of different people from whom she has learned and whom she has mentored in turn. The writers of climb-guides have a fractal sense of detail: each hairline crack and knob-for-one-foot is given the agency of each roundabout and turning of the AA itinerary from Wexford to Sligo. These writers have the same expertise as Cape Horners - who in a lifetime of salty toil may have rounded that stormy corner only a few dozen times. And indeed the weather matters: a pitch will be different if the rocks are sopping - although sandstone dries quicker than gabbro.

As well as the properties of different rock, Fleming has made the effort to learn the formal geology of the holds on which she depends. Climbers don't need to know that this pitch was laid down during the Caledonian Orogeny 400 million years ago; but it puts them in their place. In one epiphany near the top of Dubh Loch the Universe had appeared and I had lost my position in the centre.

I stared into the sky,
As wondering men have always done
Since beauty and the stars were one
Though none so hard as I.
It seemed, so still the valleys were,
As if the whole world knelt at prayer,
Save me and me alone;
So pure and wide that silence was
I feared to bend a blade of grass,
And there I stood like stone.

There's a bit of a hat-tip to Gwen "space below my feet" Moffat too.

Okay, you possibly think you don't have 8 hours of ear-time for an homage to rock. Try this interview, though.