The root of the matter 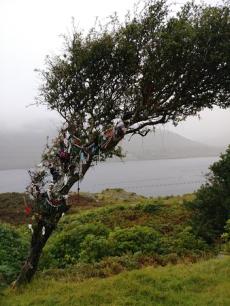 
Where we live the two commonest hedgerow trees are ash/es fuinseog Fraxinus excelsior and hawthorn/meidoorn sceach Crataegus monogyna [R with a light dusting of fairy tributes] Hawthorns are always getting uprooted in storms, ash never - they just rain branches down from on high. Eight years ago, starting a new job at The Institute, I was required to teach environmental chemistry. I was commuting to work through horizontal winter weather and I had an idea for a practical experiment for the students. "we" would measure the mineral content [Li, Na, K] of leaves (more accessible than roots) in these two species from two different sites.

Hypothesis: trees roots of each species selectively take
minerals they need from whatever soil they find themselves in
OR tree roots take up whatever is locally available indiscriminately.

There is nothing obvious in the tree-root drawings which explains why hawthorn is so often from mother earth untimely ripped. It must be some aspect of the structural integrity of the roots and/or the interface with the soil which would need instruments to measure.

As is the nature of science, the results were eh maybe, needs a bigger sample. The other result was that one of the students insisted that I supervise his final year research project. Then he decided that 'we' should apply for post-graduate funding, which five years later resulted in his PhD. And I never followed up the location.vs.species experiment because the following year, the institute hired a qualified environmental chemist, and The Man had me teach some other module for which I was supremely unqualified. I dunno about the students, but I learned a lot on that job.