High bar for the AGM

In many ways, for The Management, it would be handy if nobody turned up to the AGM; assuming the officers and the Board can muster a quorum. That way there are no awkward questions from the floor about that boondoggle in Barbados or the mysterious petty cash haemorrhage. 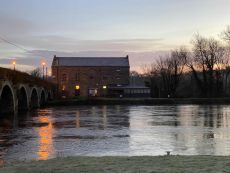 Now I believe [credo] in Credit Unions, they are embedded in the local community which is what I aspire to do as well; and so does Goodly Barrow [R] the new local café and museum. But the way our CU runs its affairs is not above criticism. I've had a swipe at them for wheeling out the PP for bidding prayers at the AGM . . . and arranging it so I never won a raffle prize at the several sequential AGMs which I attended in the Before Times. Such inappropriate grand-standing by the majority religion is completely against the aspirations we all want for a multi-cultural inclusive society in modern Ireland.

And here we go again, same mindset different problem. January is AGM month for a lot of organisations and for reasons this year our Credit Union is doing it by Zoom again. Because the CU is conservative they are trying to make it like the before times sending out the call by letter. Said letter has a 33 page wodge of agenda, minutes, proposals, financials and notes on the financials - as you'd expect.

Q. How do I register for the event?
A. Easy! Just type this 66 character link into your browser:
https://us02web.zoom.us/webinar/register/WN_QZWjY72yRuKs27pvny6euA [naah, don't try it]

WTFinances?!! 1) the link on the page is underlined because link so that makes the _underscore_ in WN_QZ invisible and 2) makes then two y's indistinguishable from v's. Shag me if I'm going to try to type that in correctly or even incorrectly. In my last puck at the CU I said that their practices were excluding muslims and protestants and a certain type of rigid atheist from attending the AGM because a representative of the Bishop of Rome was ex officio going to open proceedings. Here the CU is excluding many from their membership heartland who don't type or have poor sight or just can't be arsed to try keying in a long string of meaningless characters with CAPS lc and digits all clattered up.

But I took one for the team community and phoned in a complaint. 15 minutes later hissonour The Manager called me back and he offered to e-mail me the link as he had got it from the tech company which is running the meeting for the CU. Good so, I got my clickable link but, in the long email-trail, I also got the manager's e-mails [both CU and personal], and the name of the tech company and their Credit Union Liaison Officer's e-mail. GDPR fail! By return, I send them a tinyurl link reducing 66 characters to https://tinyurl.com/123a567b - less than half as long and more than twice as simple / memorable / dictatable over the phone to Olds like me.