With great prescience at the beginning of December, I put a hold on the Borrowbox ebook of Scientist: Edward O. Wilson: A Life in Nature by Richard Rhodes. He died, in the fullness of his years, on 26 Dec 2021, so I was ahead of the herd who wanted to read this recent biography.  The book arrived in my feed on 12Jan22 and I raced through the tale within the week: partly because I was familiar with the science and the broad brush of Wilson's contribution. But I guess also because the writing was good to great. Richard Rhodes is a Pulitzer Prize [The Making of the Atomic Bomb 1986 in re me prev] winning historian, biographer and journalist. We've covered some of the same ground: Hedy's Folly is about coded broadcasting and  Hedy Lamarr; Deadly Feasts about BSE and Carleton Gadjusek but I see a rich seam of future reading for me. 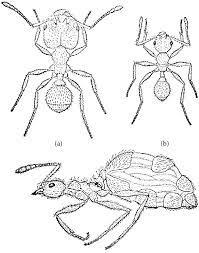 Mais revenons nous a nos formis - because ants is what engaged EO Wilson's attention for  the best part of 8 decades - he started early and stayed the long course: fit and lucid into his 90s despite having lost the sight of one eye as a teenage angler. It is not inappropriate to compare Wilson's contribution to 20thC biology to Darwin's in the 19thC. Darwin's 8 year obsession with barnacle growth and development is matched by Wilson's love affair with the genus Pheidole - a widespread and diverse genus of ants [Pheidole dentata's distinguishing features drawn L]. His comprehensive 800 page, 625 species, 650 illustrations Pheidole in the New World A Dominant, Hyperdiverse Ant Genus came out in 2003 and you can't afford it at €190.

It's not clear why Rhodes picked Wilson as his next project because his previous oeuvre was more about physics. It may have been that both men had grimmo absent-father childhoods that forged a dogged determinism. Anther connexion is that Rhodes was on the committee [with Annie Dillard] which decided that a zoology textbook The Ants is  by Bert Hölldobler and E. O. Wilson, should win the Pulitzer Prize for General Non-Fiction in 1991. It was Wilson's second Pulitzer - his first for On Human Nature [1979] which was Wilson's response to the internecine shit-storm conjured up in Dick Lewontin's tea-cup after the publication of Sociobiology [1975].

Sociobiology was the making of me as an independent scientific thinker when I read it (in preference to, like, the actual course material) while an undergraduate in 1976. It was also a long chunky book mostly about "animals" but the final chapter looked at humanity through the lens of what Wilson had learned about social behaviour in other animals. The idea that any part of human character was determined by genetics was counter to the [Marxist] dogma that anyone could become the General Secretary of the Communist Party of the Soviet Union if they learned how in a true Soviet school - regardless of whom their Papa was. Of course there were traces of patriarchal certainty in everything that Wilson wrote - he was born white in Jim Crow Alabama - but it is/was just lazy-arsed polemic to characterise the man himself as racist and misogynist. For the latter, he was notably generous, kind and respectful for two of my closest female friends. I'll also note that he found common ground canopy with Meg Lowman - both recognising the vital importance of biodiversity up there in that of part tropical forests which you can't see from the forest floor. 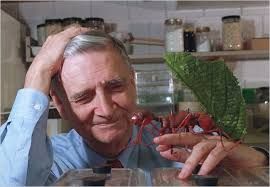 We - you and me - could do worse than make a contribution to EO Wilson's Half-Earth Project which has the conceit that humanity has shit-the-bed, yes, but is prepared to ring-fence the other half of the planet for all the beetles, bats, bees and begonias which we haven't already driven to extinction.