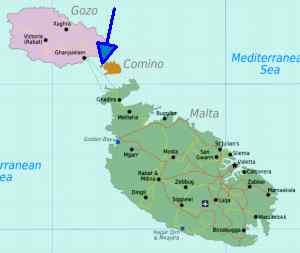 It's an island. Plonked mid-way between Malta and Gozo [L, I've drawn a crude blue arrow to identify the Blue Grotto between Comino and Cominotto its tiny sister island.  It is named for cumin / jeera Cuminum cyminum, the herb which is pervasive through the whole archipelago. We lived and went to school in Malta for a year when my sister and I were six. My father was i/c the amphibious warfare squadron which was stationed in Malta in the dying days of the British Empire. It was a magical time and place for a small white child. When we weren't in school we were on the beach or taking long walks into the Maltese countryside. The British Navy was a major employer in and around the spectacular natural harbours of Valetta: the Grand Harbour and Marsamxett. The island was soaked in romantic history from The Knights of Malta who acquired the islands from the Holy Roman Emperor in 1530, for a rent of one Maltese falcon Falco peregrinus a year. The Knights withstood a long siege by the Ottoman Empire in 1565 and dug in and built up against any further invasions particularly around the new city of Valetta. The fortifications included eventually [1618] St Mary's Tower it-Torri ta' Santa Marija, an enormous square castle which dominates the skyline of Comino. Malta endured another long and destructive siege during WWII and survived that too.

Malta is the most densely populated country in the EU with nearly 450,000 people squeezed into an area less than half the size of the smallest Irish counties. On top of that, piled into sea-front tower blocks, are 1.2 million tourists each year who come to cultivate their melanoma. That's a helluva lot of flush toilets for an island with 500mm of rainfall each year and neither rivers nor lakes [none of the above]. Water comes from caught rainfall and artesian wells which perforate the limestone bedrock like a sieve to abstract groundwater. Recently reverse osmosis desalination plants have been installed to create enough drinkable water to flush those toilets. As water is abstracted for drinking irrigation and flushing, the fresh-water lens on which the island sits is invaded by salt water from the surrounding sea. It is unsustainable and a geo-political nightmare. 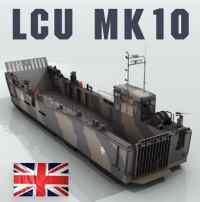 Mais revenons nous à notre 1960 Comino. One of the perks of being in charge was that the The Old Man could occasionally borrow the company car for the weekend. For 'car' read landing craft.  Essentially the same vessel as featured in Saving Private Ryan. I show a Tonka Toy model [R] to emphasise that these things were real tough toys for real tough boys.  One Sunday, the Captain loaded one of his LCs with the families of his staff [and a crew to steer the thing and make it go] and picnic hampers and we all tooled off to The Blue Grotto a spectacular cave and strait between Comino and Cominotto. When we arrived, the anchor was dropped, the front gate was lowered and we spent the afternoon swimming off the boat. Comino is essentially uninhabited by people and it was long before yachties infested every cove and harbour of the Mediterranean so it was a private off-beach party. Ah, the benefits of privilege.

After lunch in those days, children were forbidden to swim lest they get a cramp and drown. We started pegging small pieces of the remains of lunch into the water to see if they would sink or float. Some [sausage] sank and some [bread-crust] floated and some [apples] were surprising. Soon enough we were 'forming a hypothesis' [arguing about what such a thing would do] and then 'testing it' [throwing that thing over the side and noting the result]. Fifty years later that sounds remarkably like science and you've got to think that small children if left to pursue their curiosity are natural scientists.  I have a degree in Natural Science but between the ages of 6 and 16 almost nothing was done to foster this, probably universal, sense of organised enquiry. Harrrumph!
Posted by BobTheScientist at 07:14