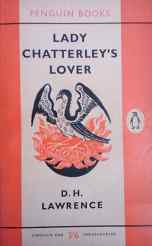 Lady Chatterley's Lover? That would be Mellors. Shortly after the birth of the Blackstairs Film Society, the sourcing committee decided to show Lady Chatterley a french version of the famous tale of inter-class bonking. It was nearly 3 hours long; so long indeed that there was an intermission [intromission was in the second part of the film]. When the film cranked up again, the audience was considerably diminished because most of the blokes had trudged off across the road to the pub as being more immediately amusing.

The story was retold again in 2015 in a BBC version which had the advantage of being only half as long. It has become one of those books that has been heard of by everyone who can read but hasn't actually been read by many of those same people. It's too long and too dated for today's book-readers. The reason for its highly regarded status is because it was put through a trial which concluded on 2nd November [today!] 1960. The trial was the result of a prosecution brought under the Obscene Publications Act of 1959. Before that Act, the Obscenity laws were locked in the morality of 100 years earlier. One judge held something to be obscene if it showed a "tendency ... to deprave and corrupt those whose minds are open to such immoral influences, and into whose hands a publication of this sort may fall."  When Edward Gibbon published his Decline and Fall of the Roman Empire between 1776 and 1789, his explanatory footnotes about sodomy and sex were in Latin because if you could read Latin you were of such stern moral stuff that you couldn't be corrupted:  “A very surprising instance is recorded of the prowess of Proculus. He had taken one hundred Sarmatian virgins. The rest of the story we must relate in his own language, . . .” The 1959 Act attempted to allow publishing naughty bits in plain English so long as they had artistic or scientific merit.

The trial was actually a prosecution against the publisher Penguin Books and marked a watershed between stuffy hypocrisy and the much more open society that now has us, and our children, awash with porn. Penguin were taking one for the team, in order to clarify the law with a high-profile test case. They sent, for example, several copies of the book to the police so that they could have something to get hot about.  The prosecution made themselves ludicrous by asking with heavy rhetoric "Would you approve of your young sons, young daughters - because girls can read as well as boys - reading this book? Is it a book you would have lying around your own house? Is it a book that you would even wish your wife or your servants to read?"

The defense, otoh, wheeled out a bishop to assert that Lawrence was portraying sex as a sacrament rather than something nasty in the potting shed. Further academic evidence was laid out to show that language was in a perpetual state of evolution and that taboos of yesterday - unmentionable words, indeed - were now common and their offensive meaning thus diluted. And above all, maybe, the jury was urged to consider the book's value as a whole rather than just highlighting the fucks and damning it as obscene because that word caused a frisson.  It took six working days and 3 hours of deliberation for the jury to return a unanimous verdict of Not Guilty.  That set the agenda for literature in a multicultural Western democracy.  It took rather longer to open the flood-gates in Roman Catholic Ireland. You have to have a high degree of self-righteousness to lay down the law about what other people can and cannot read. When I turned up for college in 1973, I brought a box full of books that I felt this one student couldn't be without. That included several books which were banned in the Republic, including The Ginger Man by J.P Donleavy. Reading, or rather laughing out loud at, this book was instrumental in getting me to meet The Beloved.
Posted by BobTheScientist at 06:46