I was chatting to Dau.I the other day about the 'fact' that she, and I, and the rest of the family are descended from James I & VI [previously ranting about smoking]. It depends on who was the father of Mary Croft, the daughter of Lucy Walter, one of Charles II's many paramours. Charles Stuart is not the most likely paternity candidate. ANNyway. Dau.I mentioned that one of her pals is definitely a descendant of William Smith O'Brien a patriot of the 1848 Young Irelander's Rebellion.  Because WSO'B was born 170 years later than Charles.II, that family can be a lot more certain about who was who's gt gt gt grandfather . . . always discounting the likelihood of bastardy. Non-paternity numbers explained.

The abortive 1848 rebellion in Ireland is seen as being caused by the potato famine on 1845-1849 which in turn was caused by the late-blight fungus Phytophthora infestans. But that's a very parochial view of the Springtime of the Peoples which saw political upheaval across Europe: 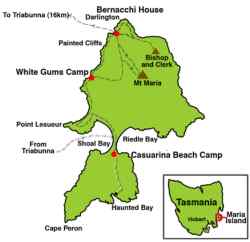 William Smith O'Brien was, like so many of the Irish revolutionaries (Parnell, Erskine Childers, Wolfe Tone, Edward Fitzgerald), a protestant which might [but won't] make some present day but historical ignorant patriots adopt a less monochrome view of who is Irish. He was sentenced to death but, possibly because His People played cards with The Man's People, his sentence was commuted to transportation to van Diemen's Land.  When he arrived there, refused to sign a parole undertaking not to escape so he spent a couple of years on Maria Island [R]. He went on to other things but we're going to bide awhile on Maria Island.

Maria Island is interesting for a couple of reasons. Bernacchi House tribs the 19thC Italian entrepreneur who set up a silk farm, a vineyard and a cement factory (despoiling the fossiliferous limetsone cliffs) which grew to employ some hundreds of people until the whole house of cards was swept away by the Great Depression. The town of Darlington was briefly named San Diego and rebuilt to house the workers, their families and a steady stream of wondering visitors. All in all, it's charming story but Bernacchi exemplifies the advice that easiest way to finish up with a million dollars is start with two million dollars. Darlington reverted to its original name but is now a ghost-town because there is no work to be had. It's a bit like the sleepy village of Bunmahon on the Waterford Coast back home. In the 19thC, the copper mines there employed 1200 people directly; and numerous other grocers, publicans and pastors live on their backs until the price of copper bottomed out and mines were all closed down.

Locally famous is/was the Robey house on the South part of the Island. Robey was a farmer, originally from South Africa, who scrabbled a living for many years until he too left. His house still stands; for many years it was left as a time-warp filled with furniture and fittings. Friendface link with LOADSA maps and pictures.

In 1971, Maria Island was declared a Wildlife Sanctuary and is currently under the care of Tasmanian Parks and Wildlife Department. Of particular interest, because they have featured on The Blob, is the introduction of Sarcophilus harrisii, the Tasmanian devil. As I indicated in January, Sarcophilus is being ravaged by a horrendous cancer-inducing and disfiguring virus. The individuals brought to Maria Island are a) believed to be clear b) serving as a germ-free reservoir for the species.  Despite the name, S. harrisii looks kind of cute and so is conservation-bait for tree-huggers. There is some evidence that the introduced devils are doing a number on the native bird-life.

More Islands? We have a list.
Posted by BobTheScientist at 05:45