She was my teacher

Ruby Bridges and Barbara Henry; what do those names tell us? Not much except that that they are both women.  In these transgender times, I would qualify that as 'probably' women. If I tell you that they met on 14th November 1960, you'll know they were definitely female. But apart from that fact, the only thing they had in common was that they both lived in New Orleans. Ruby had always lived there: for all of her six years walking this blue planet. Barbara was an outsider, born in Boston in 1932, who went to the Girl's Latin School in Roxbury / Dorchester a short walk from the Franklin Park Zoo. In school and in the street she rubbed shoulders with other girls some of whom weren't white and all of whom were treated with respect if they could cut the academic mustard. It's not fair to paint too rosy a picture of integration in the Boston of the 1930s and 1940s because I've read Death at an Early Age, Jonathan Kozol's scorching account of teaching grossly disenfranchised black and white kids in Roxbury in the 1960s.

Harvard educated [and let's not forget Rhodes Scholar at Oxford] Kozol spent some time in Paris learning his craft as a writer but came back to his native land to work with children who hadn't had his opportunities. If you're in the education biz - and that's all of us in the University of Life - you could, with advantage, read his book: only $0.01 on Amazon. Kozol was sacked for exposing himself his kids to the works of Langston Hughes a black poet and activist. The "himself " in the previous sentence is by no means a cheap shot: nowadays teachers exposing themselves to small children is one of the seepier leitmotifs of our times and would even in the 1960s have gotten a teacher fired. But I also mean to imply that by reading that poem aloud in class, Kozol was exposing his very soul . . . and that was part of the undertow that sucked him into deep water. Teachers are meant to keep a certain distance from their pupils; to compartmentalise the working day from their other passions. Nobody has explained why this is a good idea. Here is one stanza from Hughes's The Ballad of  the Landlord:

Ten Bucks you say I owe you?
Ten Bucks you say is due?
Well, that's Ten Bucks more'n I'l pay you
Till you fix this house up new.
Which will resonate with anyone who is living in a shit-hole in Cork, Kilkenny or Dublin and dare not complain to the landlord in case s/he remembers to put up the rent. The rest of the poem here.

Barbara Henry also did a stint in Paris because her education had created a ferment in her mind and she wanted to see the world. Accordingly she signed up to teach Air Force Brats [I was a Navy Brat] at a USAF base in France where she met and married a dashing young Lieutenant from Louisiana and returned home with him to New Orleans. She got a job teaching in William Frantz Elementary School in New Orleans which was chosen by the Feds to be one of the first to be desegregated in The South. When little Ruby Bridges rocked up with her ruler pencil and lunchbox she was accompanied by four Federal Marshalls and greeted by a hootin' and hollerin' mill of white folks who were trying to dam the tide of history by keeping small black girls from being in the same classrooms as small white girls. Here she is, captured by Norman Rockwell: 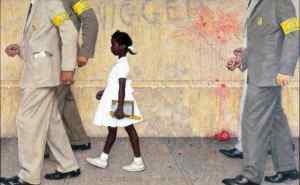 You can see that girl has back-bone. It might help to deconstruct the picture [spot the golden rectangles!] as a picture. It might also help to deconstruct the situation by noting that, when little Ruby turned up all but two of the white teachers stood down and almost all of the white kids were withdrawn from school. Ms Henry was the only person in the city who was prepared to actually teach the girl. That's nothing, or very little, to do with the Girl's Latin School or Paris. It is rather to do with the moral and physical courage that gave Barbara Henry the back-bone to defy the mob and get on with the job. Oh yes, and she loves the poetry of Langston Hughes as well:
Hold fast to dreams
For if dreams die
Life is a broken-winged bird
That cannot fly

You can read Barbara Henry's recollections of the time and place in the Boston Globe from two years ago. As Ruby Bridges acknowledges, you learn more from your teachers than ABC and where Paris is; you learn how to carry yourself. This is her story about knowing one white woman who cared for and pushed her: thereafter she was going to judge people not by the colour of their skin but the content of their character [Martin Luther King, he said that]. But that clip also reveals that her father lost his job and her grandparents lost their share-cropping holding in Mississippi . In 1996, these two game-changers, were re-united [R looking right happy to be in each other's company again].

56 years! What's changed? Well, the following year William Frantz ES was open and fully peopled including a handful of other black kids. But before you get all complacent and dismiss the events of November 1960 as so last century m'dear, you may care to remember Holy Cross School in the Ardoyne area of Belfast and the mob which tried to prevent Catholic children going to a Catholic School in 2001[no integration here].

Now here's where there really has been a big change. Check out the footage from 1960s Louisiana and try to spot the fat people . . . there aren't any.