Pieter Cornelis Mondriaan [R with one of his iconic abstract paintings] was born in Amersfoort near Utrecht in the Netherlands in 1872 and died as Piet Mondrian, having shed a good few letters from his name, in Manhattan in 1944.  I have a bit of a grá for the Painter for the Austere.  In the 1980s (was I on the dole?) I went through a phase of making cubical lamp-shades out of A3 xerox paper glued to a frame-work of 5mm balsa laths. It was interesting how something so lightweight could be quite structurally stable . . . but boring. I decorated the four vertical faces with cartridge paper in black lines with blue, yellow and red rectangles in De Stijl of Mondrian.  It is interesting to hunt for Golden Rectangles in his paintings: there are many.

He featured on Mental Floss a while ago which had drug up a number of quite interesting tidbits and the man and his times. I think his position / practice puts its finger on an element of the debate about the meaning of modern art. Once upon a time, painting and sculpture were the best thing we had to capture the way the world looked. As this work-a-day function was taken over and done more accurately by cameras and 3-D printers, traditional art was left a bit high and dry.  Creative people began to explore the world of sense and sensibility, no longer to portray the gestalt but to try to capture the essence.  This idea has been Blobbed before with Matisse and Viv O'Kelly. So don't run away with the idea that Mondrian couldn't draw or that a child of five - or an unemployed scientist - could do as well or better. The Nazis labelled Mondrian's art as degenerate: they preferred their art as sort of Nordic master-race cartoon characters that left nothing to the imagination. 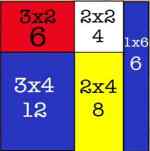 I've also Blobbed Numberphile before; it's the youtube channel for quants and wonks. They've just posted an interesting puzzle which will keep you mildly diverted when sitting through long boring strategy meetings at work. All you need is some squaredy paper. It's a bit like Gabriele Cirulli's 2048 puzzle that swept through interwebland in 2014, except that the Mondrian puzzle is super low tech.  The idea is that you start with a square (of squares) and undertake to fill it with rectangles (can be square) so that no two fillers have the same dimensions. For the purpose of the game the squares are commutative: 2 x 3 = 3 x 2. This shouldn't be difficult and I've clipped one solution, for a 6 x 6 square [L] from the Numberphile vid. The conceit is that each possible filling can be given a score = [the area of the largest rectangle] - [the area of the smallest rectangle].  In the example shown here that score is [3x4 = 12] - [2x2 = 4] = 8. A lower score is better. Can you achieve a lower score? The lowest possible for a 6 x 6 square is 5.  Is there more than one way to get this? What is the minimum score possible for larger or smaller squares? If you play for a while you'll realise that although the minimum score creeps up as the square to fill gets bigger nevertheless the increase is quite non-linear.  As I say, hours, or seconds if you're of the Twitter generation, of fun.
Posted by BobTheScientist at 06:53