Having occasion to think about Greenland, because of its mountain of frozen fresh water, made me start a very short inventory of the things I know about about the biggest island in the Northern hemisphere. There is the red and white flag [R. echoing the colours of the Dannebrog]. There are the Inuit. And there were the Vikings.  hmmm, that might be it!

The time-frame for Viking Greenland is quite precisely known. Erik the Red, a hard-chaw among even the wild Vikings, was exiled from Iceland for murder and set off West rather than 'home' to Scandinavia.  Previous voyagers had sighted a rocky shore in that direction, so the voyage was not entirely a leap into the unknown; any more than was Columbus's epic journey 500 years later and many degrees further South.  Erik scouted out the shoreline and named it Greenland as a shameless form of propaganda. In 980, he returned with several boatloads of land-hungry farmers and fighters. They built houses and later churches and imported Irish cattle and very likely Irish women and set up home. Two settlements were established: The Eastern Eystribyggð on the South Western tip of the island and the Western Vestribyggð further North along the coast near where Nuuk aka Godthåb, the current Capital, lies.  Some archaeologists name a separate Middle Settlement, while others lump that small cluster of farms in with the Eystribyggð. All three areas supported several farms as early as 985 and they thrived by farming and by trade with their contacts in Iceland and back in mainland Europe. The most valuable 'cash crop' was walrus ivory which was used for such fashion accessories as the Lewis Chessmen [prev]; but the Greenlanders also exported wool, hides, rope and other agricultural produce.  In return they obtained building timber and the iron tools to work it. 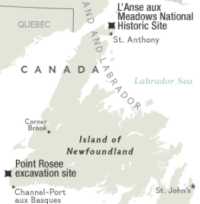 And we shouldn't forget the settlement, or at least exploration and exploitation of 'Vinland' by Erik's son Leif Eriksson, whom we've met before being mocked on Wikipedia. In the 1960s, a Viking settlement was revealed at L'Anse aux Meadows [a corruption of L'Anse aux Méduses - Jellyfish Cove] at the very tip of N Newfoundland.  Just recently, through a combination of satellite image-analysis and toothbrush and trowel work on the ground, "space archaeologist" Sarah Parcak has discovered another Norse site far to the South at Point Rosee.  [March issue National Geographic].  Don't ever get the idea that the World has been fully explored in space and time

The Norse folk were there for a long time - rather more than 400 years according to written and archaeological evidence. 400 years from the present day takes us back to the age of Wm Shagsper, Walter Raleigh and the King James Version of the bible. But a combination of circumstances caused the whole thriving community to disappear into the dustbin of history.  It's a nice little mystery with little enough data, so there is ample room for speculation and supposition.  Among the reasons:
Whatever the reliability of the data, Jared Diamond has written a chunky chapter about the end of Norse Greenland in his book Collapse. Reviewed by Jonathan Porrit in the Grauniad. Can't read? Won't read? Too busy? Try the 18 minute summary by Diamond on TED. He notes (it's been a while since I read it) that it became increasingly difficult to grow and harvest sufficient hay to get their livestock through each succeeding Winter.  Archaeological analysis of the middens show that cattle were replaced by sheep and goats as the farms became less supportive. In the same way few cattle were/are kept on our Irish 'mountains' today - the land is marginal and cattle are demanding. As time went on, seals became an increasingly significant part of the diet. Diamond makes much of an extraordinary claim that, even facing starvation, the Norse refused to eat fish.  It was as if it was not kosher or that fish sapped your manhood. These assertions have been called into question with such rhetoric as "If the Northmen were so averse to eating fish, how come they named one of their settlements Salmon Stream; huh? huh?"


Whatever the reasons, the end occurred round about the time that Henry V was thrashing the French at Agincourt [1415, Branaghprev].  In 1408 Thorstein Olafsson, an inblow from Iceland married  Sigrid Björnsdottir at Hvalsey Fjord in Greenland. That is the last ceremony of which we have any written record. The newly-weds went to Iceland and those of her neighbours who didn't follow perished where they had lived.
Posted by BobTheScientist at 06:52