Are there any Christians out there?  In this case, I'm not asking impertinent questions about the Blobo-readership.  "Out there" in the present context means South East Asia. Which SEA countries are, as a legacy of colonial rule which allowed super-active proselytizing among the oppressed people, still predominantly Christian?  The obvious one is the Philippines, which was under the thumb of Spain for hundreds of years and is now 83% Roman Catholic of whom about half regularly go to Mass. That's a lot of Christians because the total population of the Philippines [=10n,million] is bigger than any European country except Russia - if you count Russia, with is vast tracts of Siberian tiger taiga and tundra - as Europe. EuroRussians still pip the filippinos because they weigh in at 110,million.  I've not specified the exact population of Pilipinas because it is growing: 101,million last year; 102,million in 2016 etc.  Any other SEA Christian nations? . . .give up? Clue: Flag in top right-hand corner.  Okay it's:

Timor Leste!  Formerly Timor Português for 200+ years from 1i769 to 1975.  That explains why 97% of the people profess to be Catholics and, bucking the trend of all the nearby territory, much less than 1% Muslim. That might explain the exceptional brutality of events following from the Carnation Revolution of 25th April 1974 back in Portugal. The revolution was triggered by despair at the series of unwinnable wars in colonial Moçambique and Angola; and one of the first acts of the new regime was to call back all the young draftees and bundle the different parts of their distant empire into a precipitous independence. The following year, the Indonesian army marched across the border from West Timor and occupied Dili the Timor Leste capital and as much of the jungley interior as they dared penetrate. Over the next 25 years, something like 20,000 people were killed directly by the military and 4x that number became conflict-related 'excess deaths' as food supply and medical infrastructure were severely compromised. Indonesia deposed their own super-corrupt "dear leader" Suharto in 1998 and a UN-led self-determination referendum was implemented in Timor Leste by agreement between the Indonesian and Portuguese governments.  The result was overwhelmingly for independence and this formally came to pass on 20th May 2002 - 14 years ago yesterday. 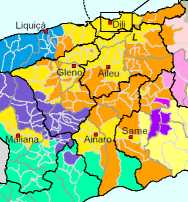 Oddly, apart from a deep distrust of Indonesian soldiery, Catholicism is almost the only thing the people [N = 1.2 million] have in common because, in a territory about 1/5th the size of Ireland or a little bit bigger than Maryland, they speak at least 15 languages: Adabe, Baikeno, Bunak, Fataluku, Galoli, Habun, Idaté, Kairui-Midiki, Kemak, Lakalei, Makasae, Makuv'a, Mambae, Nauete, Portuguese, Tetum, Tukudede, Wetarese and Waima'a.  Those on the red-list are endangered, so you'd better hot-foot it out to Timor if you want to talk to the last few speakers.  Portuguese is making a somewhat reluctant come-back after being very effectively squashed during the Indonesian occupation but the official lingua-francas are Indonesian and English. About a third of the population understand English and a similar number are more or less fluent in Portuguese.  The linguisitic map [L above] covers about 3000 sq.km including part of the border with West Timor and Dili the Capital; each colour a different predominant language.  Timor Leste includes an exclave further along the North coast of the island called Oecusse and two offshore islands, only one of which, Atauro, is permanently inhabited.  They have their own endemic languages, of course, but many people on Atauro succumbed to the blandishments of Dutch Calvinists 100 years ago and are now Protestants.  They don't seem to be notably more industrious than their Catholic neighbours, so they aren't Protestants as we understand the term in Ireland.

Any more obscure facts about Timor Leste?  Nobody from the country qualified for the 2004 Olympics but they were allowed to send two wild-card athletes both marathoneers.  The man Gil da Cruz Trindade did not finish but the woman Aguida Amaral did coming in second last at 3hr18m; half an hour later Luvsanlkhündegiin Otgonbayar from Mongolia cross the line to wrap up the event. The winner took 2hr26m to cover the course.  Four years later in Beijing, another pair of athletes were oooshed in as a courtesy Augusto Ramos Soares did not start and Mariana Diaz Ximenez did not finish. Soares was more ready for it in 2012 London and took the now traditional second last place in his marathon ahead of  Tsepo Ramonene of Lesotho. His oppo Juventina Napoleão also finished second last ahead of our own Caitriona Jennings.  We heard rather too much about Katie 'Bruiser' Taylor and her gold at the London Olympics, perhaps we should have noted that Caitriona Jennings was fitter, braver and more gutsy than 99% of her compatriots watching on the telly back home in Dublin . . . and she didn't punch anyone in the face either. For heaven's sake, where did that come from? let's get back to the coconuts and beaches of Timor Leste.
Posted by BobTheScientist at 07:07