The Fat of the Land

Dau.II was up from Cork a few days ago: for a funeral so it wasn't all happy. At the afters, we were sitting together when the woman next to me leaned across and asked "And what do you do?"  Dau.II's answer was "I'm manager of a restaurant in Cork" and it's true.  She left home 3 years ago and immediately started being productive and paying taxes.  I have a pal who is a serial entrepreneur: he's trying to make money, create jobs . . . and pay taxes too. Him and Dau.II are The Effectives keeping the rest of Ireland Inc. on the road. We are trying to reduce the number of people who are sucking at the government's teat but it's difficult and someone has to supply the milk.  As an electable politician, the one thing you can promise your constituents is jobs for the boys or, for the better heeled with higher expectations, a seat on the board. 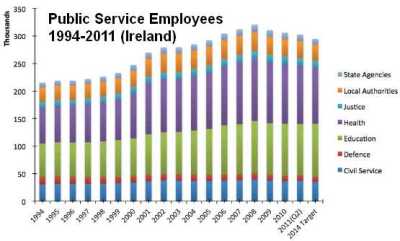 That's just under 300,000 people working for the state out of a population of 4.65 million.  The largest chunks are the health service and education both sectors which have substantially increased their numbers since 1994. The the middle of last week, the Tanaiste (Deputy Prime Minister) and Leader of the Labour Party announced her retirement from the latter part of her portfolio. When she took on that task, she compared the difficulty of doing that job with that of being President of the United States. Herding cats is notoriously difficult and the Left is more schismatic than the other side. But really how difficult can it be to manage a minority party which now only has 7 members of parliament?

Another constituency that makes big of the difficulties of their jobs are senior civil servants and incumbents on Boards and Quangos of which we have uncountable numbers - possibly 732 each with an average of 12 members. So you may want to adjust your image of Mother Ireland's generous bovine four-quartered udder to one of a sow and her farrow. The chairman of Bord Bia or the Broadcasting Complaints Commission [just as examples, lads, I'm not picking on you in particular, I could have started at the <alphabetical> bottom with the Women's Health Council] have unique skills so they command a high salary to keep them in post. I too have unique skills - nobody in Ireland has discovered more avian-specific Toll-like receptors than me - but I can't seem to be able to monetize this toolkit. Things have changed since James Joyce complained that "Ireland is an old sow that eats her farrow": now she supports us all in the style to which we have become accustomed. Not all of us, there are only 300,000 on a government salary . . . and a further 2 million (!) on a Medical Card - which is a fair surrogate for those who are netto being supported by the State: they receive more in benefit than they cough up in tax. That leaves 2.2 million. But 1/4 of those are children, who [harrrumph the youth of today]can't be expected to help with the farm or take a newspaper round, let alone earn enough money to pay tax. I think I'm correct in the maths to say that 1.65m folks like Dau.II [with her widder's mite] and The Entrepreneur [with his "limo" and "millions"] are carrying the other 3 million of us. It's a heavy burden.

One of the things me and The Entrepreneur have in common is an interest in the Food and Drink business. I don't mean that we are famous trencher-men, carving off slabs or meat and swilling it down with tankards of mead.  It's more in the nature of aspiring to make the Irish AgriFood sector more interesting and more diverse: he by setting up a company or two; me by teaching a course in sourdough bread, sauerkraut and (of course) cheese glorious cheese. Bord Bia have recently turned out a massive glossy document called Starting a Premium Drinks Business in Ireland. You could fault the over complex HTML [turning pages and that sort of nonsense] which will suck up the bandwidth but Bord Bia is not interested in supporting low-lifes who don't have broadband . . . Except that broadband is utter crap through the whole of West Cork and rural Cavan whence all the new food enterprises have sprung over the last 20 years.  But that's the sort of thing government employees do: spend a lot of time arranging the deck-chairs to 'help' the people. When the ship goes down, the deck-chairs, which can't support a drowning person, will just prevent Dau.II and The Entrepreneur from swimming away from the wreckage.  Even when the ship is still afloat, there are enough deck-chairs to 'helpfully' impede progress to the front of the boat where eyes-wide-open people can spot the icebergs. Those nominally in charge of Ireland Inc's economic recovery are on Deck 7b seeking permission to open the Reserve Deckchair Locker.  But their authorising manager is in the Executive Dining Room waiting for the Executive Sow to serve milk.
Posted by BobTheScientist at 07:03