Pictures of women in STE(A)M

I wrote a wee slag at the attempt to remember 100 remarkable Irish women which was woefully short of scientists.  There was an implied criticism of the journalists who had cobbled together the list, presumably against a deadline.  But it's not really their fault, they are embedded in the sweep of Western culture which either pays only lip-service to recognising the contribution of women or needs a huge congratulatory clap of the back when they acknowledge some XX achievement.  In that piece, I noted a portrait of Kathleen "benzene" Lonsdale by Jennifer Mondfrans in a Scientific American article by Maia Weinstock which is trying to redress the balance, by collecting some original portraiture of STEM women.  If you are a young women with an interest in science, perhaps still at school, and you have a neat image, then you can make a poster and stick it up on your wall as an encouragement to persevere. That's better than, or at least complementary to, reading about the shoulders of giants on which you intend to stand to see further into the unknown. 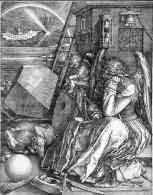 You should read the Sci.Am article because a) it is interestingly snippetty and b) you can say to yourself "I could have painted that" about the pictures.  Well I found many of them annoyingly didactic in a rather soundbyte sort of way as if the only thing we need remember about Lonsdale is "benzene" [it's the hexagonal glasses, stupid].  Then again you don't want to have a portrait fussing away with references [Durer's Melancholia L] in a sort of find 30 rabbits hidden in this picture way.  But what do I know?  I'm just a scientist and for the last two weeks I've been respectfully taking my hat off to a few students who can draw things down a microscope far better than me. Weinstock is trying to blur the Two Cultures distinction between Arts and Science: growing STEM to STEAM "acknowledging that art and design have always been integral to the fields of science and technology".  I think this a bad idea because, by opening the Door of Dispossess wider, the light is less focussed on the lack of women in Science.

Anyway, I'm glad I read Weinstock's compendium: there are women in there a) who I'd forgotten about and b) of whom I had never heard. It will give me some traction in the following months to shovel more Women of Science into the voracious maw of The Blob.
Posted by BobTheScientist at 06:35