When we lived outside Dublin, before I got whacked off my bike, between my daily commute and other trips to the shops, I cycled 40,000km.  That is the equatorial circumference of our blue planet, and it took me 7 years, in easy 12km stages.  I didn't have to cross the Pacific, or risk dengue fever, or do battle with crocodiles - it was an accomplishment suitable for the sofa-bound.  I have been a little bit more energetic on foot, schlepping up the Portuguese coast and across Spain on two legs in two legs.  But in my heart and in my capacious fundament, I'm a sofa sort of guy.  This is why I am a little in awe of athletes and adventurers like Luz Long, Emil Zatopek and Mark Pollock. I've recently come to believe it is not coincidental that these three men all demonstrated out of the ordinary moral as well as physical courage.

We spend a lot of time and money trying to protect children from their own foolishness and ignorance, we pad the surface of play-grounds and forbid children to run in them, we drive the young shavers to school rather than making them walk or cycle. Heck, we even protect them from peanut butter.  But nothing worth learning can be taught, and if you don't let your kids try things, even dangerous ones that make you gulp with anxiety, you are failing to provide for their education. I've quoted from Swallows and Amazons before "Better drowned than duffers, if not duffers won't drown". We need people who are Out There, pushing the envelope of their, and human, endurance. Round the World is as far as you can go without going into space with Richard Branson. Dick Rutan and Jeana Yeagar's epic non-stop flight round the world in 1986 took them 9 days. 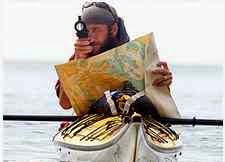 In July 1996, Stevie Smith and Jason Lewis [L navigating - hint: it's the compass and the map - through Indonesia] left Greenwich (presumably at the meridian) to circumnavigate the globe going mostly West using only human power. Some of these expeditions can seem like rather pointless stunts to up the ante when someone has already completed the basic task. Like hitching round Ireland with a fridge for luggage, or crossing the English Channel in a dustbin. But you have to commend the participants for doing something different to show the rest of us what is possible.  It might just shake us out of a complacent certainty that there is nothing we can do it about it.  "it" being something enormous like the climate change, the starving millions, the dispossessed in our own cities or something finite like our own asthma, unemployment, unhappiness.

On 6th October 2007, more than 13 years after they left, Lewis and Smith cycled back across the Meridian from the East towing the Moksha, the pedal-powered boat in which Lewis and others had made most of the long-haul ocean crossings. Their expedition was a huge logistical exercise needing a lot of organisation (visas, anyone?) but Lewis was the only one who legged it the whole way.  Their rules on engagement meant that they couldn't sail across the wet bits, but they varied relentlessly pedalling the Moksha by kayaking through the Indonesian archipelago.  On land, their main transport was bicycle but Lewis roller-bladed from Miami to San Francisco for a bit of variety.  It took him 9 months longer than he anticipated because the legs were cut out from under him by a drunk-driver in Colorado and he couldn't progress with both legs in plaster.

They called their endeavour Expedition 360 and consciously made it educational for young people. Lewis spoke at 900 schools in 37 countries about self-sufficiency, inter-dependency and saving the planet. You can read what dozens of papers had to say about the various legs of the journey. You can even get the T-shirt.

What does it amount to? A demonstration that you can go as far as you want by "shank's mare", you just have to allow a bit of time. But time is not something to be saved, it's something to be experienced. You don't see dolphins or feed turtles as you fly from Singapore to Sydney, you don't see the sun boiling up out of an empty sea, you don't see your own soul as you endure a sixth week without speaking to anybody.
Posted by BobTheScientist at 06:56