We depend upon aluminium to a quite remarkable extent.  All those soda cans, all those plane fuselages, all those water treatment flocculants, all those immunological adjuvants, all those TV dinners and Indian take-aways. Aluminium is mainly sourced from the mineral bauxite and the economy of Jamaica depends on the export of its reserves of the stuff.  Getting from red mineral to shiny metal is a two step process. First grind your rock, add caustic soda NaOH and boil it up in pressure vessels. This 'Bayer process' converts almost all the available Aluminium into soluble sodium aluminate and thence to pure aluminium oxide.  The oxide is then electro-smelted to obtain the metal.  The last stage in the process requires enormous amounts of electrical energy which is the reason why recycling aluminium products is one of the most cost-effective ways of saving the planet. A by-product of the Bayer process is 'red mud': a highly alkaline sludge of iron oxides contaminated with titanum and diminishing amounts of other heavy metals. It's not obvious what to do with this residue, so the standard practice was to push up a berm and leave the red mud indefinitely in large holding ponds.

Jamaica is not the only place you find bauxite, and there is a rich seam of the stuff in the middle of Hungary near the village of Ajka.  The Marxist regime of Hungary created a huge industrial complex to exploit this resource and after the fall of communism this state-owned utility was privatised as MAL (Magyar Alumínium Termelő és Kereskedelmi Zrt.).  Presumably some officials and some would-be industrialists made a lot of money in the transition.  MAL continued to process the bauxite and when one pond was full they built another.

Well, four years ago today, on 4th October 2010, the wall of one of these sludge sumps gave way after a summer of heavy rain in central Europe and spilled a million tons of caustic red gloop into the landscape. That's a lot of material: about equivalent to the BP Gulf oil disaster that had happened earlier the same year.  The difference being that the oil blooted out over four months before the leak was capped while the Ajka 'leak' took only 4 hours.  The nearest downstream village Kolontár was overwhelmed by a wall of caustic red liquid 1.5m high [see tidemark L] and 7 people were killed in the immediate aftermath. All life was instantly extinguished in the Marcal River, the nearest running water course. 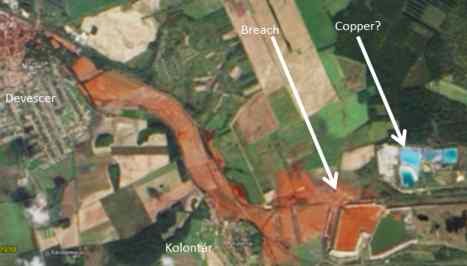 Further downstream, despite a desperate scaling up of elementary chemistry (tonnes of vinegar and plaster were dumped into the Torna river to counteract the alkalinity), the toxic soup reached the Danube 3 days later. The subsequent investigation showed that the privatised company had acquired the assets cheap on the understanding that it would meet all the environmental protection requirements.  Hollow laughter from off stage?  Since the crash we've heard a lot about Moral Hazard: the economic doctrine that financiers are likely to engage in riskier behaviour if they know that the consequences will be borne by somebody else, usually me-the-taxpayer.  It is no solace whatsoever to appreciate that reckless pursuit of money is not limited to bankers.  The Hungarian government arrested the CEO of MAL and 9 days later, after emergency legislation had been pushed through parliament, re-nationalised the plant.  They estimated that the clean-up [physical scraping above] and remediation would take at least a year and cost at least  €110 millions.  Check out the photo-essay in The Atlantic about the clean up one year later.
Posted by BobTheScientist at 07:18