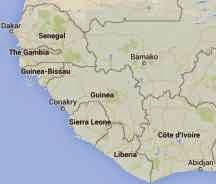 A couple of days ago, the WHO announced that the 10,000th case of Ebola had been logged in West Africa. The eipcentre is . . . geography 101 . . . Guinea-SierraLeone-Liberia [L]. The same week a recently returned American health volunteer returned to JFK, and took the subway to his New York apartment and hung out with his pals and then felt queasy and ran a fever and was diagnosed as case 10,001.  US authorities (NJ, NY) have now announced a 21 day quarantine for all such returning volunteers which may put a stop to the gallop of volunteerism among the competent health-care professionals. Hey lads, it could be worse: quarantine comes to us from medieval Italian quaranta giorni: the forty days that the Venetian authorities required incoming ships to wait in harbour before they were allowed intercourse (yer yer, not just that sort of intercourse) with the people ashore. Combatting epidemics is hard work and you/we have to put up with some inconvenience or risk losing half our Irish and Ukrainian children to Ebola.

On Newstalk-FM, here in Ireland, they give a regular slot to an American right-wing mouth called Michael Graham "he's a bit of an eejit but I enjoy listening to him".  Early last week he was commenting on the case of one of the Ebola-infected Texan nurses and expressing amazement that the nurse's dog was being kept in quarantine in her home while she was fighting for her life in intensive care.  With the insightful insensitivity that Graham is known for he asked "Why don't they just shoot the dog?".  The previous day, the Ebola-expert spokesperson for our own Health Service Executive HSE, was saying that current policy is to try to identify contacts of any Ebola victims that might turn up in Ireland - always ensuring the privacy of the already identified cases. Pardon? I would think that containing an epidemic of a virus that has a +50% mortality rate would trump niceties about telling the neighbours. Over the weekend, US nurse Kaci Hickok returned from working through Médecins Sans Frontières with Ebola patients in Sierra Leone.  Instead of being greeted with open arms and a brass band, she was confined to her own home in New Jersey under the new quarantine regulations. Her lawyer is talking about constitutional rights and civil liberties. Me, I think that, until we get scientific consensus on the transmission profiles of this virus, we should act on the precautionary principle.  It's only 3 weeks. Actually, given that this is not the first Ebola outbreak (just the worst), I'm reasonably confident that Science knows how Ebola is transmitted (direct contact with bodily fluids). I'm less confident that medicos will reliably follow their own protocols: 3 bloops already in the US in as many weeks. That's an error rate about as great as the Space Shuttle program (113 flights; 600 'seats'; 14 deaths = 2%)

I was talking over some the issues with my three Nigerian students at the institute during a slack time in class. The Nigerian government is claiming that after six early cases, their country is now Ebola-free. I expressed some skepticism about this because, I suggested, there are a helluva lot of Nigerians, some of whom live hugger-mugger in dense marginal-quality housing, and people in suits will lose face if they cannot/do not control the out-break. The Irish BTSB Blood Transfusion Service Board is chronically short of blood donors but refuses contributions from people who lived in the UK in the 1980s. That is because a bunch of cases of variant-CJD (mad-cow disease) were diagnosed in beef-eating citizens of Britain during those years. We've met Kuru a variant of this disease before. The cause of the outbreak of the disease in cattle was the practice of  feeding ground cow-hooves and bone-meal to cows as protein supplement. The cause of the species jump is unknown and it was rare. But in France, say, the same feeding practice was carried out and/or British beef was imported and consumed, but the French have seen NO cases of vCJD and so blood donations are welcome from French people living now in Ireland. I put it to you that in both France and Nigeria absence of evidence may not be evidence of absence but absence of a willingness to look under the carpet. I've indicated that the decision-making process and standard operating procedures SOPs in the Irish BTSB have been a little suspect w.r.t., say, HIV.  It transpires that they don't want blood from anyone who hails from sub-Saharan Africa.

Ali Maow Maalin [R with pocks] died last Summer in Somalia still tirelessly working in the Somalian health-care system. He succumbed to malaria while pushing forward a polio vaccine programme in the district of South Somalia where he lived and worked. He might have died in 1977, when he became the last person to contract smallpox 'in the wild'. A huge effort was required to contain that one case in a comparatively delimited and isolated region on the coast of East Africa. It's going to be tougher now that the Ebola cat is well out of the bag. Last June Maalin got a fever and carried on working "I don't think he went for medical service early enough. He was so busy in the field, so focused on monitoring the campaign." By the time he was admitted to hospital it was too late for him.  Piffling about at the edges of the Ebola epidemic will be just a waste of time and money . . . and lives.
Posted by BobTheScientist at 05:55