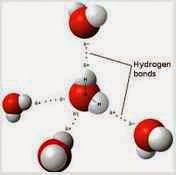 We are 90% water, so you'll excuse me if I bang on about the stuff on The Blob.  It comprises nowhere near 90% of the written material here, however, and most of my meanderings are about water in large quantities: lakes, exploding dams, exploding lakes but the molecular structure of water has important implications for the existence of life on earth and, equally important, the best way to make a perfect cup of tea.  It's all in the hydrogen bonds, innit?  Like 1066 is the only historical date that any fule kno in England, so H2O is the only chemical formula that the girl on the Clapham omnibus is likely to remember from skool chem lessons. Each oxygen in water is attached to two hydrogens which leaves two pairs of electrons on the opposite side. The electrostatic forces from these electrons complement a residual charge in the hydrogens and so adjacent molecules tend to stick together. Similar "hydrogen bonds" are what holds together the two strands of the double helix of DNA, so they can be pretty strong. The asymmetry of the water molecule makes for rather strong hydrogen bonding - much stronger than equivalent "hydrides": methane CH4, ammonia NH3, water OH2, hydrofluoric acid HF(1) as you go along the top row of the periodic table. You can work this out from theoretical physical chemistry but you can also see it in a table of boiling and freezing points.
The hydrogen bonds hold the water molecules together so that they are unwilling to change "phases" from solid to liquid to gas. These changes are driven by increasing the energy input - usually by an external heat source.  But also by the force of gravity as a weighted cheese-wire cuts through a block of ice by liquefying itself down; the ice-block freezes again behind the travelling wire so is still in one piece after the wire has passed through.

When water freezes it forms an open crystalline structure as the hydrogen-bonds are calmed down by the lowering temperature.  When the ice starts to melt and the boomerang-shaped molecules start to shuffle sluggishly about, they settle into  a more compact (and hence denser) structure.  It's a bit like when corn-flakes settle under mild shaking in transit from Battle Creek Michigan to Omsk or Omagh. As further heat is applied, the molecules start to move about more vigorously and require more elbow room - the material becomes less dense and normal kinetics apply . . . warm water floats to the top, colder denser water sinks. The transition point between these two opposite effects occurs at 3.98oC at sea-level at which temperature water has its maximum density. But the key thing and what makes water unique is that the solid form floats.  When it gets cold in Winter, ice forms, but when the sun comes up in the Spring its warmth gets direct access to the solid material and melts it.  Another factor is that ice is a remarkably good insulator, so the propagation of cold down into lakes and oceans is inhibited buy the ice-blanket on top. If ice was denser than the liquid form, as all other solid phases are, then the Spring thaw would never happen because the heat could not penetrate to the bottom of the lake where the ice was. Without this neat happenstance, there would be no life on Earth and a helluva a lot of ice.

And what about the tea? Well, the stickiness of hydrogen-bonds means that a lot of energy is required to make the phase transitions.  The data (a unit of electricity = kWh = (Ireland) €0.16c:
Shifting a gram of water from solid at 0oC to liquid at 0oC takes almost as much energy as getting it from there to boiling point.  But the next transition to water vapour is enormously more 'expensive'. As I explained in my investigation of alternative hot beverages, the optimal temperature for brewing tea is so close to boiling point that you may as well boil the kettle.  But if you are making coffee or a fortiori maté, you're being extravagant in your consumption of electricity: every gram of steam is costing you a mort o' money in electricity and threatening your domestic comfort with condensation, tuberculosis and an early death. But forswearing all hot beverages and drinking nothing but cheap red wine is not the answer either.
Posted by BobTheScientist at 06:28