Before we left home I was on a youtube jag watching ancient episodes of a BBC documentary series called Timewatch. It's like CSI for historians. In 45 minutes, they set out a historical problem (where exactly was the Senlac Hill of the 1066 Battle of Hastings?), wave their arms dramatically at the landscape, bring in a back-hoe and an army of volunteers with trowels and paint-brushes, find some arrow-heads in an unexpected place (yessss!) and roll the credits. It's all good fun and you learn a little with each episode. One thing you don't learn from such a neatly packaged TV programme is that archaeology is damned hard work, often working in a limited window of time before the real bulldozers come in to start work on the motorway or city-centre car-park. One thing you do learn is that context is everything.  It drives archaeologists bonkers when Joe Public turns up at the museum with two silver coins and a pot-sherd which they found in Granny's attic - where in heck did she find them, they need to know.

When we moved to the farrrm 18 years ago, we started to clear out one of the sheds that had been used primarily as a fuel store. The fuel was peat, dug off the face of the mountain, air- and sun-dried during the Summer and brought down as a Winter store in creels or later on a tractor-trailer.  What we inherited was 80cm of peat dust, which was only good as humic bulk for the garden, with some nutty fragments that were good to go in the stove.  But there was also an archaeological dig's worth of other material: a bicycle with one wheel (buckled) ; a pair of trousers; some bottles; waxed milk cartons; baler-twine; bones;  fertilisers sacks; another pair of trousers. It took me months of elapsed time and many trips with the wheel-borrow to clear the shed so that we could fill if with our trash. If I'd cared I could have estimated when hessian sacks were replaced with plastic and when tetrapak cartons arrived in rural Ireland

I've been in my gaffer's cellar, on and off, for a week now.  Coming up for air and cups of tea and then plunging down to deal with another dusty box of papers.  It's very much like an archaeological dig down there because the papers are layered: an incoming letter is next to its reply - often helpfully held together with a rusty paper-clip.  This context is important because The Gaffer had several consuming interests that he was inching forward in parallel.  In broad terms his main interests were 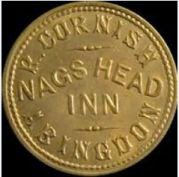 I've been scanning through a stack of correspondence about Spitalfields market checks, when the pile will suddenly switch to some pages of a Catalogue of Gloucester Tavern Tokens and then be disconcertingly replaced by a list of of Taft descendants from Cinncinnatti. It doesn't help that, in an exercise of thrift, the blank side of galley-proofs of one project were used as rough note-paper for another. There are days and days of work in here - his work over the last 25 years; not mine over the last week.  When a rubbing of an minimally inscribed tavern token flutters out of a file marked Staffordshire, I have been careful to put it back there, so that the work of diligent research does not need to be repeated. I was particularly struck by this issue when processing an album of ancient photographs of worthy 19thC Tafts with mutton-chop whiskers and high collars [and that's just women]. The names of these old buffers were written beside the photo but the glue had long since failed; so I had to keep each cluster of photographs next to the cardboard pages on which they lie.  Without that context, they become just another anonymous 19thC photograph. The identifications might have been made by an old lady, long since dead, who knew these chaps and their wives as a child.  If this makes you want to go and chat with your own grandmother before she slips her cable, I suggest you arrange to do it this weekend rather than at some indefinite time in the future.

Posted by BobTheScientist at 03:17