To thine own self be true

Back in April, I wrote about an unlikely Irish connexion in the famous Parisian photo Le baiser de l'hôtel de ville. Have a look closely at this family photo [L] and ask if you notice something really odd about the people?  If you were a competent historical fashionista you could work out that it was taken in the mid 1930s.  You notice that the two children are very different in size, but that's normal as one if twice as old as the other.  Then you see that the man is about twice the size as the woman and that's a quite disconcerting. I was hunting around for an explanation: you can't see her feet, maybe the bottom of the pond is a step down from the shore.  But even so, she is either petite or he is enormous or both.  But the evidence of two children says that they are within the normal range. My position is that there's not much you can tell from outward appearances.  My dusky friend is as good as me as a scientist, a citizen, a man, a father but he is less respected because he has a better tan.  I've also written about finding pretty suspect a requirement to salute in unison except in the military. "Le patriotisme, c'est l'œuf des guerres. [Patriotism is a kind of religion; it is the egg from which wars are hatched]" (Maupassant). Since WWII we are especially exercised about that salute.  But we shouldn't be frightened of mere gestures so I'll put up another photo: 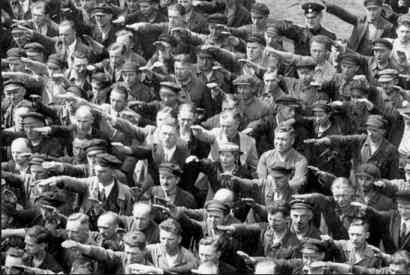 There that was painless. The second photo was taken a tuthree years before the first and they are connected because August Landmesser features in both.  We know the date of the second - 13th June 1936 - precisely because it was an event  - the launch of a Kriegsmarine training vessel called the Horst Wessel - and it finished up in the newspapers. If you look carefully (Where's Wally?) you'll see something quite extraordinary in NSDAP Germany - someone is not Heiling Hitler. Landmesser joined the NSDAP in 1931 because he thought it would help land him a job in the deepest recession of the 20th century. That ploy worked insofar as he was soon working a Hamburg ship-yard that was churning out ships for Das Reich. So far, so ordinary; especially if you don't take the high moral ground and deny that you would have done the same in the circumstances. He doesn't appear to have been a true believer, however, and his expression in the photo has been characterised as "Meh". It doesn't really look like a courageous stand against the iniquities of the regime, but going against the flow is really important, somebody has to do it. One of the unconsidered certainties of the time and place was that The Party was not only running the trains on time, it was fundamentally A Good Thing. Landmesser was a little skeptical and this photo is the evidence that he was skeptical at the time rather than by re-writing his personal history after the war.  He fell in love with the small woman in the bathing cozzi, Irma Eckler, and they were engaged but couldn't get married because she was Jewish and he wasn't and the Nuremberg Laws (Das Gesetz zum Schutz des deutschen Blutes und der deutschen Ehre) forbade such marriages. Interestingly, she was a Sephardic Jew whose family had come to Hamburg from Spain via The Netherlands: most German Jews were Ashkenazim. Things went pear-shaped for these ordinary citizens thereafter. The parents were arrested, imprisoned, released, sent to a death camp, sent to a penal labour battalion and disappeared during the war along with millions of others across Europe.  The daughters were separated but, like Jakow Trachtenberg, through a succession of lucky breaks survived. When the famous photograph of the man who didn't salute was re-churned by the German press long after the war, one of the daughters recognised him as her father and the dates-and-locates seemed to fit.  You can fill out the story and see a better picture. Or get a much more detailed and data-rich story.

Landmesser was not a hero in the obvious sense of the word, just a man trying to make the best of difficult circumstances beyond his control without compromising his integrity too much.  His birthday is 24th May 1910. We have a name to trigger the removal of hats and a time to do it.  Make note in diary!
Posted by BobTheScientist at 09:15