. . . Göring!  Hermann the older was born 12 January 1893 and Albert two years later: 9 March 1895. People of my generation born about 10 years after the end of WWII will have heard of the older chap: the WWI air-ace; early (1922) joiner to the NSDAP in Germany; personal pal of Adolf Hitler; shot in the leg during the abortive Munich beer-hall putsch; poster-boy for rapacious acquisition of stuff from people who were being condemned to concentration camps; patron of the arts; creator of national nature reserves.  But when I was acquiring my history of the 20th century in England in the 1960s, I knew the names of the key players but never reflected that they might have had parents and siblings. Or that those family members might have been of a different political persuasion. A few years ago, I heard about Hitler's Irish nephew - Alois Schicklgruber-Matzelsberger-Hiedler-Hitler Adolf's brother was a waiter at the Shelbourne Hotel in Dublin and married local girl Bridget Dowling. They had a son called William Patrick "Willy" Hitler who became Willy Stuart-Houston later in life. It's not so much a spelinge problem for the surnames of these chaps like it was for oceanographer Ale[ss|x|j]andro Malaspina, it is more a problem of fuzzy paternity and illegitimacy. But it does make you hope that genealogists are skeptical about following families by relying on surnames rather than on Y chromosome haplotypes.  There is an episode of House (01x02) where this makes a difference - if the surname doesn't track the Y chromosome it won't track any of the genetic predispositions to disease either.

I've mentioned one example of how survival during the desperate years of the early 1940s hinged on an accident coupled with the regime's obsession with keeping their records alles in Ordnung. In the comments of another blogosphere post on the subject, The Black Rabbit of Inlé said with insight: "These “I only survived the gas chamber because >> insert implausible story here <<  could make a decent Ho£ocaust book of their own.". The Landmesser parents didn't make it but their children did and so did Jakow Trachtenberg. The odds were extraordinarily long but people did survive and ascertainment bias leads us to think that we might have made it through too. In statistical terms a random person caught up in die Endlösung was as likely to win the Lotto . . . without buying a ticket.

It is also salutary to reflect that good things did come out of the NSDAP regime: that's why I appended a couple of positive attributes to the tweet-long summary of Hermann Göring's life.  It is fatuous to think that Nazi Germany was wholly black because it leads to the corollary that We are wholly holy white.  One aspect of similarity is that both there&then and here&now everything was/is for sale.  Everyone was/is corruptible by money or favours or blackmail. Not everyone of course, not you. But in Ireland, and apparently even more in Spain, you can subvert the system and achieve a desirable outcome for comparatively little money. 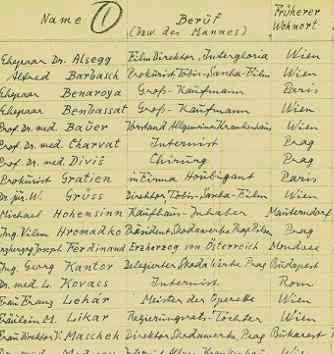 Which brings us back to Albert Göring. Like his brother he came from an immensely privileged background and was used to telling people what to do. He hated the bombast and bullying of the brown-shirts and made several mad gestures of defiance: defending random Jewish women who were being duffed up in the street and using his distinctive surname to cow people who tried to push him around. He refused to use the absurd greeting Heil Hitler and was never known to raise his arm in that salute. His august brother bailed him out on numerous occasions but he still kept on suborning the system to save a few of his friends from the grinding maw of the death-camps. It's an enigma: to go on bucking the system for a decade under increasingly trying circumstances might be more than you could bear to watch if Spielberg is tempted to make a sequel to Schindler's List called, maybe, Thirty-four and Counting. It could be based on William Hastings Burke's book Thirty-Four.  Half of the 34 names are on the list shown above: they are people whom Albert Göring told his allied interrogators would vouch for him.  Like Luther it seems that Göring's attitude was Ich kann nichts anders.  Apart from the few that he saved, he got small thanks for doing right. After the war, the once influential name became a millstone when he looked for work, but he refused to change it like Hitler's nephew.  In a last gesture of tweaking the nose of The Man, a week before he died in greatly reduced circumstances he married his house-keeper so that she would inherit his modest pension entitlements.

Note: no more Nazis for a while, I'm done.
Posted by BobTheScientist at 09:01