In the 1960s there wasn't much to read.  The number of titles published each year was only starting to go exponential, so it's not surprising that I read The Cruel Sea by Nicholas Montserrat who had served in corvettes during WWII.  It was made into a ripping film starring Jack Hawkins that was almost as good as the book. Corvettes were tiny, seaworthy ships that were designed for protecting convoys from U-boats, they had a complement of about 100 men and were a major factor in the eventual success of the allies in the Battle of the Atlantic. My father, 22 at the out-break of the war, was also dashing about in even smaller motor torpedo boats.  He never talked about his experiences, probably because it was all still too raw, so my brother and I had to read about other sailors' experiences to get a feel for what it had been like for our Old Man - or watch the movie.  Some years later when I was still a teenager, I met my father-outlaw who'd also spent the war at sea under rather different circumstances but he didn't talk about his experiences either; until much later. Except to suggest that he'd lost his cherry in Buenos Aires with a girl called Aurora. Pat was rescued by a Canadian corvette when his ship was torpedoed. Going to sea is another of the list of things that I know I wouldn't have had the bottle for: the bridge of these vessels was open - completely exposed to the elements; kevlar and gortex hadn't been invented; you were kept warm by woollen clothes which insulate well even when they are soaking wet. The only element that I could imagine standing was the sleep deficit but that's also probably a fantasy based on the amount of sleep I seem to need now rather than the amount I had when I was 22.  The Cruel Sea is best watched outside trying to shelter in the lee of a harbour wall in a storm while wearing a woollen duffle-coat and trying not to scratch a salt-water boil on the back of your neck. 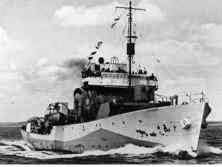 70 years ago today at 2130 hrs, just as it was getting full dark, HMCS Regina [L] a flower-class corvette the same as HMS Compass Rose in Montserrat's book and HMCS Agassiz which saved Pat, was torpedoed and sunk in half a minute when she went to pick up survivors from a liberty ship, SS Ezra Weston, that had herself just been torpedoed. You can get a feel for what it was like to serve at sea in 1944 from eye-witness testimony in a documentary The Mystery of HMCS Regina K234 about the events of 8th August. 30 sailors died but 66 were saved despite the instantaneous sinking of their home. The consensus of survivors opinion seems to echo the verdict of the official report. The Captain of the corvette made the mistake of assuming that the master of the Ezra Weston knew what he was talking about when he claimed he'd struck a mine.  The standard operating procedure for mine strikes (rescue crew men) was different from torpedo strikes (be ++vigilant and/or hunt down submarine) and by following the former, the Regina was a sitting duck for a second torpedo. That will hint at the enormous stress sea captains are/were under at sea.  Cold, wet, sleep-deprived, maybe ginned up on benzedrine they had to make snap decisions on which the lives of the whole crew would depend. It's not only in wartime either, the Empress of Ireland, the USS Evans and the Andrea Doria all sank with considerable loss of life because people made the wrong decision at sea. Regina's hero of the minute was 22 year old Leading Seaman Tom Malone who, when the Captain fatefully ordered Engines all stop, asked permission to disable the depth charges which were normally primed to explode at a depth of 20m. It was just about the last task he completed. When the torpedo struck minutes later and the Regina went down like a stone, none of the depth charges exploded and the 66 men floundering in the water weren't blown to buggery.  L/S Malone's body was one of only three from the ship that was recovered from the sea. Military training enables people to carry out necessary tasks in extremely dangerous conditions. It makes it harder to lose your head under stress and so more likely to save your skin and the lives of your ship-mates. The sea may not be cruel but she is unforgiving.
Posted by BobTheScientist at 07:01