In the depths of last winter we went to see gripping, if paint-dripping, film called Museum Hours in which the male lead is a museum guard in Vienna who has used the long tick slow tock clock tick time tock waiting for potential vandals to study the paintings under his charge.  Me, I tend to race through museums glancing at a few of the most striking pictures before heading off to buy post-cards in the gift shop.  But I know that there is another world of insight and interpretation in the best paintings, if only I had the time and aptitude to devote some focussed and informed attention.  Years ago on one of a couple of lonely Bobby-no-friends trips I made to Paris in my teens, I was listlessly rubber-necking through the Jeu de Paume Museum when I overheard an erudite American explaining a picture to his two guests.  As I had just nodded past this same painting, I was amazed at how much detail and sensibility could be abstracted from a painting which had been hardly worth a glance from me. 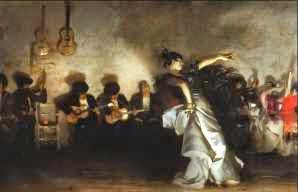 Monday afternoon we spent with P in the Isabella Stewart Gardner Museum on the edge of Downtown Boston.  We started off with an extravagant lunch, that will require a working week to pay for.  The Beloved had arrived before the rest of us so had the chance to have a quick scoot round one of her favorite Museums after an interval of 30 years.  Over lunch she described a striking analysis of the fluid dynamics of flamenco by John Singer Sargent [El Jaleo R] and filled in the detail that, at the opening of trhe Museum in 1903, Sargent said that Gardner had done as much for the painting by her hanging of it and he had in the painting of it. If I'd been given that sort background when I was young, I might have stayed in the Arts Block and not made the abrupt change to a lifetime in Science.  Then again, I couldn't draw or paint to save my life.

When we finally poured out of the restaurant, somewhat the worse for drink, we only had 45 minutes to cover the whole museum, so I asked to be shown the three key accessions in the building.  El Jaleo was the first and nearest of these. I was then pushed out doors into the Monk's Garden which is a maze of shrubbery-beds with small but perfectly formed trees separated by winding pathways of steel-grey brick. From the chill air-conditioned interior it was like entering a Chinese laundry - warm and damp with a strange smell - and the intricate curves and intersections of the paths made me think of Euler's  Königsberg Bridges problem.  Must get map of museum and count the odd nodes!  Then we rushed upstairs to see the 'white' portrait of Mrs Gardner [L] as she makes a dramatic entrance into a room in Venice.  TB and P were arguing about who was the painter when the absurdly young attendant said "It's Zorn".  As none of us had asked her and she was wearing a uniform we could not hear what she said, so she repeated "Zorn".  Well, dang me!  If I'd ever known anything about Anders Zorn, it has long since slipped beyond my two-week event horizon.  Now it may be that this young woman is an Art History major at one of the myriad Boston area Universities or it could be that she is just paying attention to her surroundings.  Either way, I'm impressed.

But actually none of these exhibits did it for me as much as a long cool dark corridor on the second floor lit from the end by a brilliant medieval stained glass window looted-by-almighty-dollar from some European cathedral.  And it wasn't really the window either, just the length of quietness. You cannot help either but be taken by well of the courtyard around which the house is built - with its attention to detail and the relentless sound of burbling water it reminded me of the Alhambra.  If you have a shed-load of money you can do things right.  We were hanging out of one of the many upstairs windows drinking in the scene when TB suggested "I'll close my eyes and count to 15, and you each have to appear in a different window" but we were far too old and knee-compromised to go off on such a playful romp.

We're heading home to Ireland this afternoon much richer for having spent a fortnight in Massachusetts.  For starters we need a fountain in our yard and at least one room paved in dark red tiles.

Posted by BobTheScientist at 15:12