Red is the colour of 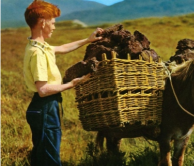 Paddy Lydon is dead.  His shock of red hair matched by that of his sister (whom I've cropped from the 1960s John Hinde postcard on the left) may have done more for the Irish economy than James Joyce and the IDA.  John Hinde's iconic technicolour postcards were printed in their thousands and did much to bring foreign tourists to (the West of) Ireland.  The fact that they found Connemara greyer, damper and dumpier than the postcards didn't stop them spending $1000 a head during their visits over the last 60 years.  I liked the quote in yesterday's IrTimes: 'his cousin recalled. “He would joke that his father, Christy, had cut the turf and had made everything in it – the kids, the creels – except for the ass!” '.
I was interviewed by Swedish TV in the 1990s about the curious fact of the red-headed Irish; I suspect because I was the only one in the Genetics Department when they called.  In any case, I was the only one who would have been able to segue the conversation into a discussion of the frequency of red-haired cats in Donegal.  The cats in the NW have an unusually high frequency of the Orange gene, as I discovered while working for my first scientific grant in 1978.  I was testing a hypothesis (we called it grandly the historical migration hypothesis) that Vikings had brought cats from Scandinavia in their langskip and by an accident of genetic sampling included a disproportionate number of orange ones.  It was built on the observation of really high frequencies of the "O" gene in known Viking foundations like Orkney and Shetland.
I had a lovely, lonely time tooling about the County that Spring in a Citroen Dyane scoping out cats and determining their genetic makeup.  So I'll thank again my sponsors - The Donegal Historical Society - who took a risky punt in awarding a scientist the Harley Bequest grant that year.
Posted by BobTheScientist at 09:15