If you've cast your net of knowledge acquisition sufficiently wide over a sufficiently long period, you can find a connexion between any two bits of information that you pluck from the interweb.  This is particularly true if your universe is constrained to a very limited nibbling at the surface of a corner of an outgrowth of the blogosphere.  A couple of weeks ago, I was commending Mary Fairfax Somerville because she made readable the important but impenetrable works of Pierre-Simon LaPlace. The very next day, I read a 3quarksdaily rechurn of an article in the Daily Telegraph about Shakespeare's debt to Michel Eyquem, Seigneur de Montaigne.  The connexion/coincidence was that, like LaPlace, Montaigne's Essais ('trials') really took off after they were translated into English. The translator was was John Florio, a second generation Anglo-Italian whose father had been a Franciscan friar in Tuscany before losing his faith and gaining a wife.  Like Somerville, Florio added something to the Essays that made his version preferred even among those who were fluent in French.  Possibly because their court French of the North (Langue d'oïl) differed from Montaigne's Southern dialect from the Dordogne which owed something to Langue d'oc. But more because of Florio's engaging turn of phrase and clarity of language. I should point out that Google translate makes a dog's dinner of rendering Montaigne quotes into English.

As another connexion/coincidence, two days ago I alluded to Other Men's Flowers a famous anthology of poetry compiled by General Wavell, the last-but-one Viceroy of India. He got his favourite unpretentious tumtitty-tumtitty-tum poems into print because one of his subordinates was author Peter Fleming.  I tried to find out the origin of the title of that anthology and have tracked it back to an author's description of the Essais: J'ai seulement fait ici un amas de fleurs étrangères, n'y ayant fourni du mien que le filet à les lier. I have gathered a posy of other men’s flowers, and nothing but the thread that binds them is mine own.  But the neat turn of phrase adopted by Wavell is only recognisable in the translation (Florio?) - Google renders it more lieterally as "a cluster of foreign flowers".


Montaigne is much more than the French guy who was plagiarised by Shagsper. I had the temerity to suggest, on Bloomsday for added sacrilege, that you and I could manage quite well without ever reading James Joyce's Ulysses; I won't say the same thing about the works of Saxspere because, even discounting the Harry Potter hype about England's (only?) dramatist, there is insight to be had from The Bard about the human condition. But Montaigne was there a generation before Shakspeher, writing his heart out in his reflections on himself and what went on around him.  The Daily Telegraph piece refers to an earlier Montaigne review in the same paper: of a 2011 book by Sarah Bakewell (How to Live, or a life of Montaigne in one question and twenty attempts at an answer).  The title was clearly chosen by a dingbat of an editor after the 2006 megablockbuster Eat, Pray, Love: One Woman's Search for Everything Across Italy, India and Indonesia.  But the title is what you can get from Montaigne: you can get a clue about what matters when you're up against it: up against death, up against difficult relationships; up against ill-health; up against the beginnings of a turbulent era of internecine strife. 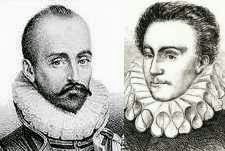 On dit que the Essays were born out of the grief Montaigne [L] experienced at the loss of his pal and neighbour, the poet and jurist Étienne de La Boétie [R]. "Si on me presse, continue-t-il, de dire pourquoi je l'aimais, je sens que cela ne se peut exprimer qu'en répondant: parce que c'était lui; parce que c'était moi." (Why did I love him? Because he was he and I was me.) There has been speculation that the relationship between Montaigne and La Boétie was more Greek than watching Manchester United together and jeering at the ref while downing a slab of tinnies.  Montaigne did get married after La Boétie died and sired a number of daughters but he regarded his marital duties as a chore.

After an active and much travelled adult life: as a member of the Court of King Charles IX; a soldier and health-tourist in Italy; member of the Bordeaux Parlement as well as the Mayor of the city, Montaigne retired from public life and locked himself up in a tower on his estate [L] along with a library of books and his thoughts, reflections and experience. He wasn't bothered by his mother, wife or the servants up there.  Les Essaies was like a blog: everything that crossed his mind or had crossed his path went into the Essays and it grew and grew until it was nearly half a million words.  Sure a copy-editor could have reduced the word-count and resolved some of the internal inconsistencies but that would have diminished the book which is a metaphor for life itself in all its mess and beauty, triumph and pain, love and longing. Dang! it's not a metaphor for life, it is A Life, and an interesting life too. Montaigne gives us an insight not so much into his own life and times but into Life and how she is lived.

I guess scientists like him, although his education was entirely Arts Block and study of the classics (he was fluent in Latin before he learned French), because of his advocacy of skepticism. A key for his ideas on the education of children was to encourage them to critically evaluate the truth and the facts that they were presented with. Because Combien de choses nous servoyent hier d’articles de foy, qui nous sont fables aujourd’huy? . . . so many truths from The Canon are recognised today as being mere stories. His watchword has come down to us as the middle French phrase Que sçay-je? which Florio might have rendered What wot I? or as we would ask now What in heck do I actually know, discounting what authority has told me?  Because he recognised that il n'est rien cru si fermement que ce qu'on sait le moins - nothing is so firmly believed as that about which we know the least. Anyone believe in god?

I bought a copy of The Complete Essays twenty years ago when it was published as a Penguin Classic but I can't find it now.  I hope I lent it to someone and that it had as profound an impact of them as it had on me.  Looks like the Bakewell biog is a stand-alone alternative as well.  But for the time-strapped you might embrace a set of essays by Bakewell in the Guardian from 2010 in their series How to Believe.  Part I  RTE's Sunday Miscellany had a piece this last Sunday 29/Jun/14 about Montaigne's essay On Cannibals, it will be up as a podcast in a few days.

Posted by BobTheScientist at 05:12