I was bigging up Lynn Margulis last year because I knew her well and her course BI504 Evolution had a huge impact as I sat through it with shining eyes in graduate school. In her course, Margulis marginalised humans, indeed mammals, indeed vertebrates as a slightly boring and rather uniform wart on the edge of life's diversity.  She championed a five kingdom division of the living world: Animals, Plants, Fungi, Bacteria and Protochtista.  In 1980, when I took the course, she was happy with the first four bins but acknowledged that Protochtista was a bit of a grab-bag consisting mostly of unicellular organisms that had a nucleus (so were not bacteria) but didn't comfortably fit in the other three kingdoms: including human parasites like amoeba, trypanosomes, giardia but also various algae and things you find in pond-water. But she was wrong, and the timing shows that it takes some time for even a smart, iconoclastic scientist at the peak of her game to absorb new ideas.

Because at the end of 1977, Carl Woese and his post-doc George Fox, had shook all the toys out on the floor and started putting them into different boxes.  They were able to do this by exploiting a new technique for classifying microscopic organisms that didn't depend on growing them on Petri dishes.  It turns out that many, even most, small-small t'ings cannot be grown on a Petri dish no matter how you trick about with the ingredients in the agar. One of the reasons why everyone knows about Escherichia coli, although few can spell it correctly, is that it can be cultivated in vitro (on a glass Petri dish). E.coli, far from being the gut bacterium, in fact contributes less than 1% to your intestinal flora. Before Woese and Fox, microbiologists did nifty things looking at the size, colour and shape of colonies growing on agar in dishes, measuring the metabolic chemicals that went in and out of those colonies and looking at the size and shape of the microbes under a microscope.  I've spent a very enjoyable year in The Institute doing this C19th science with our Yr3 Food and Fermentation Microbiology students.

It took pretty much everyone a long time to take on board this radical shake-up of how we viewed the living world, but like Barbara McClintock, Woese, knowing he was right,  just kept plugging away gathering more data. Woese had been working for the previous decade and a half on nucleic acids DNA and RNA, trying to suss out the genetic code and, when that was sorted by himself and many others, churning out sequence information particularly of structural RNAs in the ribosome.  The ribosome is the biochemical machine, shaped like a teeny cottage loaf, which translates RNA into protein codon by codon.  It consists of maybe 60 different proteins held together with three strings of RNA.  In 1977, Woese and Fox published a classic paradigm-shifting paper in PNAS which suggested that although two bacteria might look identical (oval blob) down a microscope they were as different as two things can be and still come from from the same planet. In particular they recognised that "things without a nucleus" (i.e. different from us) should definitely not be lumped into the same bin. Executive summary and context by Jon Eisen. 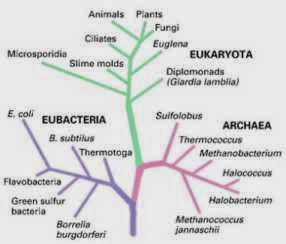 This picture is a recent assessment of the state of our knowledge.  4/5ths of Margulis' kingdoms make up the pale green branch pointing upwards and plants / animals / fungi which are effectively the visible portion of the living world are three twigs on a limb of a branch of the whole tree. So you can see why she might have talked up a storm on W&F 1977, but as far as I remember, she did not. [I've gone back and checked my notes from the course and she did mention that the 16S rRNA from methanogens was very different - but that meant that methanogenesis was 'early'; rather than that bacteria of her fifth kingdom were polyphyletic]. The animal 'kingdom' is so well embedded in our language and understanding of life's divisions that the three major groups identified by Woese and Fox are referred to as Domains. It was intitially thought that the recently identified Archaea were ancient hold-outs from a primitive earth living in extremes of temperature, or in weird chemical stews in geologically active ponds.  It being so difficult to cultivate a given microbe in the lab, it's taken a while to realise that Archaea are found pretty much everywhere and that several species are extremely abundant and impact significantly on cycling of carbon (whoop whoop global warming alert) and nitrogen on the planet. Also note the implication that Archaea are more similar to things-with-nucleus Eukaryotes than they are to the rest of bacteria - although this view is under intense scrutiny now.

The other important consequence of the technique of RNA sequencing is that you can pull up a net full of sea-water or an aliquot from the intestinal flora or a shovelful of contaminated soil and get a good Petri-free idea of the number and types of the invisible organisms that inhabit those environments.  This bears on diagnostics, environmental chemistry and numerous other fields. Woese died a couple of years ago, but today is his birthday 15 July 1928.  Hats off!
Posted by BobTheScientist at 07:38