From the report from Pravda about dangers in the Moscow Metro Моско́вский метрополите́н: "About 100 people die in the metro as a result of heart attacks. A cardiac arrest may occur because of the sultry air, pressure difference, rumbling trains and intensive flow of passengers. The situation reaches the critical point during summer." Pravda  Правда as everyone knows means Truth, so they must be correct 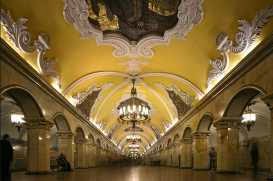 Bollix!  I hear you cry?  Is this news?  Is this unexpected?  What is the baseline?  It turns out that cardio-vascular disease is the #1 killer in Russia.  About 1 million people die of this (= heart attack) each year.  There are just over 140 million people in the country, which to me is surprisingly small: less than half of the USA and a much smaller proportion compared to the EU.  So every year 1/140 of Russians die from heat attack which is about half of all deaths from all causes.  The death rate is not untypical of Western countries at 13/1000.  What else do we need to know?  The Moscow Metro is vast and really well used: 7 million people use the system every day which is conveniently close to 5% of the whole country - not a lot of people live in Siberia while Moscow is Russia's largest city with 11 million inhabitants.  So you expect 5% of the million fatal heart attacks in  any one year to occur to Metro users.  That's 50,000 but they only appear as one of the people overcome by "sultry air" if they are actually in the Metro system.  I put it to you that the average time spent in this super-efficient mass transport system with only occasional fatal derailments is 30 minutes or 1/50 of the day.

So you expect 1000 people to suffer a fatal heart attack while using the Metro and they've only clocked 100.  Clearly the "pressure differences [and] rumbling trains" prevent heart attacks and the safest place to hang out is underground. And why wouldn't you?  It looks gorgeous. Train-spotters must live forever!
See similar tetchy argument for the death of Linus Pauling.
Posted by BobTheScientist at 05:22