Youtube has many tributes to Sugru from a surprising variety of geeks and techies. And I've shown how this stuff has consolidated my inherent thrift. Here's an Arts Block story tribbing the iontach-ábhar.
Once there was a young block-head from the forest called Sceach Bunoscionn whose legs got crushed by a falling tree.  But with the help of a crutch and a walking stick he was able to hirple about without a bother, although he did get teased for the way he walked. He was as clever as wooden-top can be and when he grew up he went to technical college. There he did exceptionally well, taking courses from Forestry 101, through Arboriculture, Introductory Tree-surgery, Tree pathology, pests and parasites (TPPP), Propagation & Grafting, Vernalisation for Seeds, and on to Apiary and Pollination.  He wrote his thesis on Deforestation in Indonesia which won him accolades, not only in his own college but in the University in the capital. After several years of successful field work in Sumatra and Sulawesi, he returned to take up the Chair of Tropical Forestry at the University.  Nobody could pronounce his Irish name so he changed it to Thorn Hirple 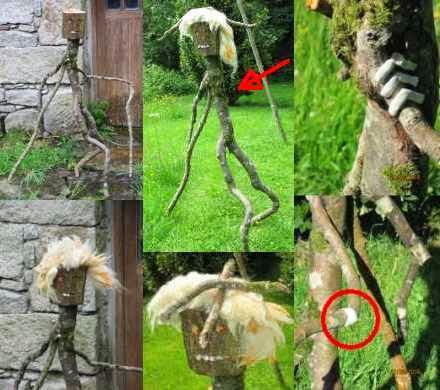 The Professor acquired a reputation for wild eccentricity, and not only in his hair. Theatre was integral to most lectures and juggling hatchets to at least one. One day while visiting a neighbour's farm, some fiesty lambs came at him in a bunch - thinking he had milk - knocked him over and broke his arm. This allowed him to shock the students by coming to class with his fractured limb on his head. But the Provost declared that this was bringing the University into disrepute and Professor Hirple should shape up or ship out (the Provost had done time in the US Military). Hirple was mortified and went off and got legless in the tradition of Ben Battle:

Ben Battle was a soldier bold,
And used to war's alarms;
But a cannon-ball took off his legs,
So he laid down his arms!
When he woke up from his three-day blinder in Strasbourg, he had no memory of how he'd crossed several national frontiers and found that he'd changed his name to Hagedorn Humpeln and signed up for a five-year contract with La Légion étrangère. The Legion's surgeons were able to fix his broken arm with a spot of black Sugru under the oxter. He survived basic training, grew to enjoy La Boudin [blood-pudding], marching v e r y  s l o w l y and proudly wearing his white képi. His academic qualifications were not much use, except in the Legion's table quizzes, but Sceach was not a one-trick pony and in the military his many other skills and abilities came to the fore. In the last year of his contract he was promoted to Sergeant, with white Sugru chevrons for being conspicuously plus dur que les autres mecs durs de la légion.  The Future Needs Fixing but with its extra white bracing Sgt Humpeln's left arm definitely doesn't.


Posted by BobTheScientist at 06:42