On the afternoon of 25 July 2004, after taking four days to walk 105km North from the city of Tui just across the Rio Minho/Miño from Portugal, The Boy and The Blob pulled into Santiago de Compostella in NE Spain.  Here we are at the doors of the cathedral: 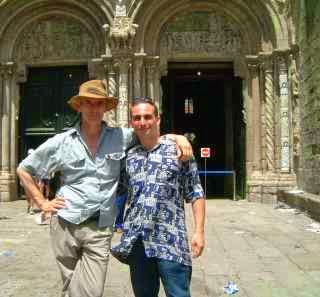 The chap on the left clearly has a spare tire.  Six walking weeks and 700km later, the golden-tan hat had acquired a dark organic-rich band from boiling 12kg of fat up through the top of my head, and I was in France.  The picture was taken ten years ago. Today, I have no intention of walking 20km.

Posted by BobTheScientist at 06:46