Throwing shapes on the map

Argentina declared its independence from Spain in 1816 and Chile two years later. The default position for establishing a 5600km boundary between these two neo-nations was uti possidetis juris: the scope of the existent Spanish provinces should determine who owned what. It's fairly straight-forward if extremely wiggly for the bulk of this border which is defined by the Andes Cordillera: the peaks and water-sheds of the mountain range delineating the issue. That should be clear except when the water-sheds tell a different story from the peaks. The last glaciation (before Spaniards and possibly before people came to S South America) shifted enough rock that some lakes which used to empty East to the Atlantic (and so be Argentine) now flow West through the Cordillera into the Pacific. 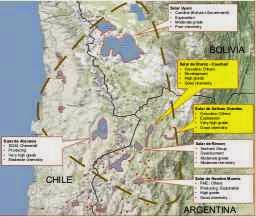 It mattered not a jot at the time because nobody was interested in recreational skiing or mountaineering.  It matters a bit more now because there is a cluster of brine lakes [R] right at the top of the border which are loaded with lithium and lithium is vital for the future of electric cars.  It's quite amicable up there so far because each country (and one for Bolivia too) has its own exploitable salars. The Lakes further South, where there is a dispute, have in general been divided in half with a straight north-south line, without much fuss.
In 1818 Patagonia was a wild and woolly place inhabited by native South Americans and fur-trappers. Darwin passed through the region 20 years later and was shocked at the lack of amenities with which the local people fended off the brutal weather.  In 1881, representatives from the Chilean and Argentine governments sat down to sort out all the disputes so that they could get on with governing and not fussing about any trifling bits of territory which were probably wholly untaxable because nobody lived there, no mineral resources were apparent and nothing profitable would grow. The "Great Powers" - in this case primarily the USA, France and Great Britain - had an interest in the outcome because they wanted to ensure that the Straits of Magellan would be freely available to their merchant shipping.  Weirdly and confusingly the US ambassadors to Santiago and Buenos Aires were called Thomas A Osborn and Thomas O Osborn respectively, and they along with their British counterparts put their oar in the water in an advisory capacity which probably meant the threat of gun-boat diplomacy. 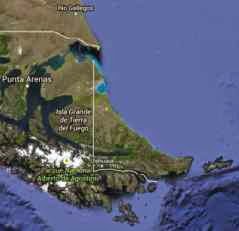 The upshot of this desire not to put the Straits of Magellan under the jurisdiction of a single nation led to the apportionment of half of Tierra del Fuego to Argentina, so that the Eastern end of the Strait at least should be not-Chile. There had been some slack surveying of the area, including by Darwin's HMS Beagle, so that the border as stated in 1881 would have given Chile access to an Atlantic coast at San Sebastian Bay: the bright blue indentation at the N of the Atlantic coast of Tierra del Fuego (map L]. This would never do, so the border was shifted 40" of latitude West, winning Argentina some 600 sq,km of tundra which is less than 4km wide at its narrowest point beside the Bay. Everything South of the Beagle Channel (the narrower wigglier navigable strait between Atlantic and Pacific) was assigned to Chile while Staten Island, 30km East of the point of Tierra del Fuego, became definitely Argentinian. 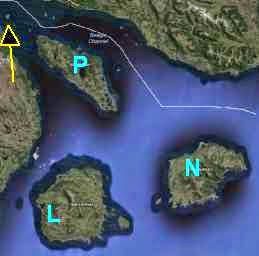 Those old enough to remember the Falklands/Malvinas War in 1982 will not be surprised to hear that the 1881 treaty, which was signed on 23rd July in that year, was not the end of all disputes. "All the islands south of the Beagle Channel" depends on where the channel ends and the open ocean begins.  The map [R] shows Picton, Lennox and Nueva island, which have at various times all been claimed by Argentina as being not Chilean. The yellow arrow identifies Snipe Island, an uninhabited islet which in 1958 came close to precipitating a war between the two nations over who had the right to erect a navigational aid in the form of a lighthouse.  For the last 30 years the Tratado de Paz y Amistad de 1984 entre Chile y Argentina, mediated by the Pope JP II and his representative Cardinal Antonio Samorè, has held the peace in the region. Huzzah!
Posted by BobTheScientist at 06:40