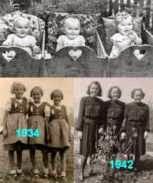 Elisabeth Kübler was born, weighing just 1 kg, in Switzerland on 8th July 1926, the eldest of triplets, followed by sisters Eva and Erika.  They were, along with all the Swiss of her generation, fortunate not to have been born 50km North and lived through the full trauma of WWII in Germany; although she did contribute to relief work in her home town delousing refugees. My mother who was born 6 years earlier than the Kübler sisters also did her share of delousing young British recruits in the ATS which was an eye-opener for a well-educated middle-class girl.

Immediately after the war, Elisabeth visited the death camp at Majdanek and met a girl about her age who had survived because the workers just couldn't cram another person into the gas-chamber and she eked out an existence in this limbo - officially dead (she had been put on  a list and ticked off by the machine) and so no longer processable. This survivor had seen her whole family, all three generations, literally go up in smoke, but was determined not to propagate the dread, loss, hatred and anger that she has experienced.  As they parted she said to Elisabeth "If you would only know that there is a Hitler in every human being!".  Which Elisabeth couldn't accept in herself because she was clearly, to herself and to others, a Good Person.  On the way hitch-hiking home from Poland, however, she fell desperately sick from typhoid and was picked up starving dehydrated and half dead in a German forest. She said afterwards that she had been so hungry that, if a small child had wandered past with crust of bread, she'd have taken it from him. That revelation of the truth in herself resolved her to study medicine to try to understand how an innocent child gets transformed into a casual monster.

She didn't graduate from Medical School until she was 30 but she'd met and shortly after married an American fellow student called Manny Ross, thus acquiring her much more familiar name Elisabeth Kübler-Ross. She wanted to specialise in pediatrics, but was pregnant at the time and was therefore excluded from pediatric internships, so she took up a psychiatry residency instead.  She was deeply unhappy about how the US medical profession blanked dying patients and their relatives.  Accordingly she asked a number of articulate terminal patients to talk to, and invite questions from, medical students.  Over the years she talked to numbers of dying people - and she bucked the trend by tending to tell people that they were dying.  Her notes began to look like data as she recognised the same responses to dying happening in different people from different ethnicities, of different ages, sex and medical condition. I daresay there was an element of ascertainment bias: when the next patient fitted the emergent hypothesis the latter was strengthened, but when that patient didn't fit then the discordance became an exception rather than part of a counter-theory.

Anyway, to bring her novel ideas to a wider public, she wrote up her findings and ideas as a short book On Death and Dying, which was published to critical acclaim in 1969.  It was an idea whose time had come and, as well as getting good reviews, became a best seller. The thesis is that, when confronted with the grief that follows on loss or its anticipation, people go through a predictable process of five stages of grief which has a handy mnemonic acronym DABDA (auf Deutsch)
Over the subsequent 45 years, this has been useful because it has put some structure on a deeply disturbing process which has served as a road-map to orientate the people involved. The main downside has been that K-R Model was treated by many people, family and professionals, as proscriptive rather than descriptive.  If you're not angry at the death of your father, you should seek professional help!  No reasonable person, who is able to handle nuance, and who recognises that folks are different, would hold that DABDA works in lock-step discrete stages for all normal people. Elisabeth lived for another 35 years and had time to write On Grief and Grieving which allowed her to crit her own first draft. The whole Stages of Grief model has been roundly dismissed by George Bonanno a clinical psychologist from Columbia U.  He emphasises ('e's well 'ard) the resilience of human adults in the face of trauma: they bounce right back at the slings and arrows of outrageous fortune and have no time for grief.  No grief, no stages of grieving: there, easy.  I don't think he's been to many Irish funerals recently watching the crumpled faces and slumped shoulders of the immediate family.

EK-R didn't approve of euthanasia, she felt it was better to finish the script rather than flinging down the book before the last paragraph of the last chapter. Whoa, that's a bit officious: sometimes the book is too damned painful and boring and you know how it turns out anyway.  The clippy quote often associated with her: "People are like stained glass windows: they sparkle and shine when the sun is out, but when the darkness sets in their true beauty is revealed only if there is a light within". is, to me, annoyingly judgmental: who decides what the light is, what beauty is.  Death is rarely pretty.

It has been much easier to dismiss her contribution because, like Darwin's doppleganger Alfred Russell Wallace before her, Kübler-Ross crossed over from talking to the dying to talking to the dead. Her lectures began to seem off-planet, and audiences declined. She fell in with a charlatan spiritualist called Jay Barham and four spirit guardians called Salem, Ankh, Mario and Willie. The latter was rather appropriate because Barham was shaggin' the young wans to provide the ectoplasm during the séances.  A skeptical friend switched on the light in the middle of a session to reveal a priapic Channel to the Next World wearing nothing but a lop-sided turban.

But forget all that and look at what she did for a) starting the conversation about the last journey b) making The End as comfortable as possible in hospice or hospital or home c) not turning her back on dying HIV-AIDS patients and making their last weeks as easy and judgement-free as those of people whose cancer was caused by another sort of virus.
Posted by BobTheScientist at 07:16