It is an ancient Mariner,
And he stoppeth one of three.
“By thy long grey beard and glittering eye,
Now wherefore stopp’st thou me?"

Did I tell you about my Camino? I'm not boring you?  Did I mention how pilgrimage can be transformative? If I'm sure of anything on that subject, it is that nobody was ever transformed by reading about someone else's pilgrimage . . . or thinking about going . . . or putting mink oil on yer boots.

Nevertheless, books about pilgrimage can be interesting if the author has been changed by their journey and/or uses the story as a hook on which to hang their thoughts about life, the Universe and everything. It even works if the trudge takes the author to different places and they go deep or quirky on the local history. There is little value in the mundane description of beers and blisters and inconsequential chatter with other randos on the way. And I think we the reader should hold back the accolades when an established literate and literary person is making the journey cossetted by their publisher's advance. Like Bill Buford's Heat. 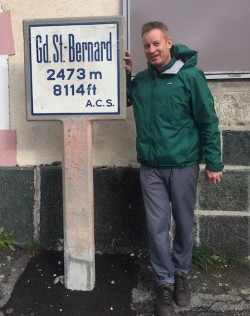 I'm finished audiobooking A Pilgrimage to Eternity: from Canterbury to Rome in search of a faith by Timothy Egan.[R at the Col du Grand St-Bernard where Switzerland cedes to Italy]. I live a sheltered life, so I've never 'eard of this Pulitzer Prize winning NYT columnist who has written 9 nine! full-length books and gets regularly reviewed in newspapers of record WaPo, NYT (of course), Guardian.

This book is longer than my 800,008 steps along the Camino an analysis of the process of pilgrimage and the Via Francigena from the tomb of Thomas à Becket to St. Peter's in Rome is 2x more steps. It's more discursive, too: Justin Welby, Martin Luther, Jean d'Arc, Victor Hugo, Savonarola, St Lucia Filippini, Dom Pérignon all lived or died close to the route of the V.F.

Egan grew up Catholic in Spokane and his pilgrimage seeks to reconcile some of the disconcerting aspects of belief. For followers of an all loving Christ, Catholics have a track record of killing a lot of people who couldn't squeeze through a rather narrow gate of faith. His community, including his youngest brother, was exposed to one of the many pedophile priests who were rotated through different parishes rather than sanctioned. His brother's bestie later killed himself from the shame of his abuse. How do you become a fan of Pope Francis with all that hurt in your bindle?

Despite being a best selling author and journalist; and despite having access to Jesuit back-channels to the [Jesuit] Pontiff, Mr Egan does not secure a personal interview with the head of his church and has to make do with a glimpse of Francis as he whizzes by on a golf-cart outside St.Peter's. I had a similar fleeing encounter in the drizzle with Pope JP II when he visited Boston in 1980: and bought the t-shirt! He's happy enough with that, because pilgrimage is a process not a destination.

If you've been on The Path, then you should enjoy this book. tl;dr? 25 minute interview with transcript.